Brie and Beaujolais? More than meets the eye at this vino Mecca – Loose Canon Cheese and Wine Review 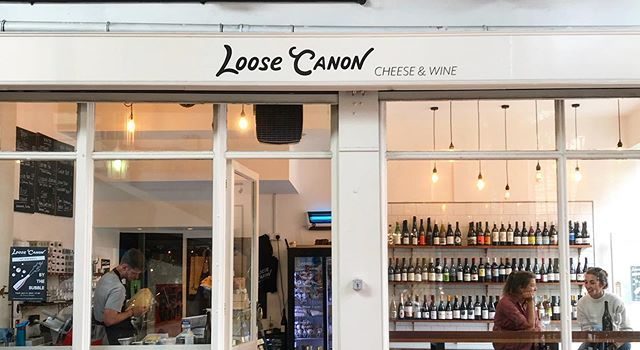 At first, you might think Paris, with the lazy feel of customers leaning against walls and using anything available for a seat outside on the street, conversing on a beautiful midweek August evening. But this is very Dublin. Loose Canon is an individual like no other in the city and the people have embraced it like it’s rather different but busy near neighbouring waterholes. The mood outside is one of Irish charm and craic as punters joke and sip on these natural delights as the sun sets upon Drury Street. The pairing of wine and cheese has been around for centuries and modern day scientists have explored the reason behind why they go so well together. High fat and high protein foods balance the taste of tannin, making cheese the perfect partner for wine. For example, hard cheeses soften tannins giving a fuller and fruitier taste. Owners Brian O’Keefe and Kevin Powell opened Loose Canon just over a year ago as their second location to go along with the popular cafe Meet Me In The Morning and adjoining Reference coffee. The city centre has a host of great wine bars but at Loose Canon, things are slightly different as they stocks over 100 varieties of natural wines. What is natural wine? Without going into the finer details, the grapes are grown with as little interference as possible then hand picked and again largely left to themselves during the fermentation process. Natural wines are made without using the usual chemicals added to remove oxygen and mass produce consistently but instead wild yeasts are encouraged with each vintage being truly unique showcasing the vineyards and wine regions. Natural wines are often unfiltered which keeps them vegan as no fish products are used as is the case in a lot of conventional wines. The chalkboard above the counter shows us today’s six wines to purchase by the glass along with a sake, a sparkling option and some juices.

We started with Masieri Bianco, Veneto, Italy €9 a delectable cloudy (from being unfiltered) white so easy to drink we left with a bottle to take home (€23).

A Masieri Rosso was also available €10 but the next stand out for us was the Puszta Libre, Burgenland, Austria €9. Served chilled, this red bursts with fruit flavours and could be described as alcoholic Ribena. Next was one of my favourite grapes beautiful Teroldego with strong notes of strawberry – Lezer, Vianeti delle Dolomiti, €8.5. Located in the last outlet of Georges arcade facing out onto Drury street Loose Canon is a small premises with a few stools, wooden counters and standing space although a lot of the customers pour out onto the street outside. The main wall is lined with bottles to purchase some of which with the most fantastic and interesting labels from the natural wine world. The counter has a selection of a dozen or so cheeses all from Irish suppliers including names like Fingal Ferguson and Corleggy. The fridge holds large lumps of cured meats and the ever helpful staff slice to taste before you choose what to bring home with you. The daily changing menu read deliciously so we began with Broughgammon Rose Veal €6 & “Knockalara Fresh” €5 (pasteurised sheep). The soft cheese crumbled delightfully as I spread it on the thin toasted slices of Le Lavain sourdough (I am told LC will be baking their own sourdoughs very soon) and bundled up with the Veal and a homemade apple chutney that is the first item polished from the plate on each occasion. Our second helping consist of “Silka Crop” €6 (raw goat, unpasteurised) from the jewel of Cavan that is Corleggy Cheeses and some bitesize Gubbeen Pepperoni Sticks €4. We then struck gold after manager and wine enthusiast Fabian suggested we try the “Fried Chicken”. Initially apprehensive to the thought of fried chicken in a wine and cheese shop we decided to play along and how happy we were that we did. Homemade toasted cornbread forms the base of this creation, then topped with kohlrabi remoulade providing a tasty crunch before the free range fried chicken is placed above only to be finished with a pickled charred shishito pepper so mouth watering I would have had no problem eating a full plate of them. All of this for just €9 too. If you arrive before half 5 you can also chow down on one of the ever changing gourmet ham & cheese toasties usually priced around €8.

There is very little to fault with Loose Canon bar maybe we wish it was a little bigger. If you fancy something a little bold to bring home on a Friday evening stop by to grab a bottle, a block and some slices of heavenly meat because we guarantee you this treat will leave you more satisfied than any supermarket confectionery ever will.