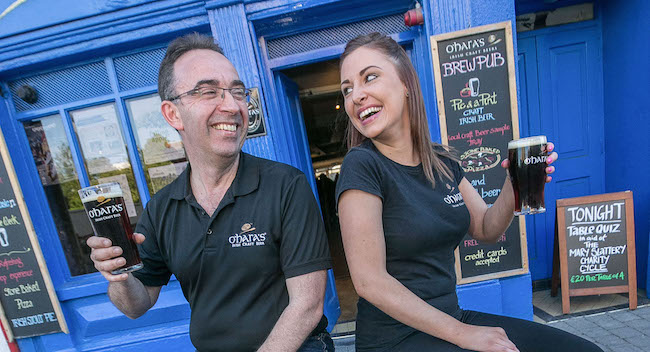 As I write this on a depressing Bank Holiday Monday, with weather more in-tune with February than June, i’m glad to be able to tell you about a lovely little spot down in Kilkenny.

Brewery Corner, the pub owned by the good folks at Carlow Brewing Company, more popularly known as O’Hara’s Beers to you and me, has just reached a milestone. It celebrated its second anniversary. Nestled on Parliament St, opposite the Watergate Theatre, and just down the street from the former Smithwick’s Brewery. It is an easy bar to find. 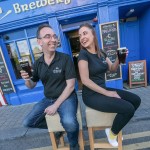 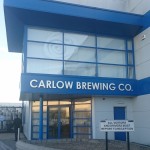 We’ll talk about the bar a bit more in a while. It is appropriate to talk about the Carlow Brewing Company and Seamus O’Hara. Carlow Brewing was established in 1996 and up until recently the majority of their produce was exported abroad. I’m happy to say that now, it’s much closer to a fifty fifty spread. With more and more of their beers being consumed at home. O’Hara’s is definitely one of the most prominent Craft Beer Brands widely available throughout Ireland. 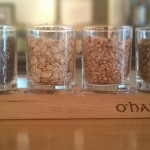 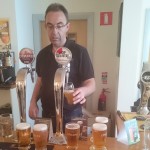 We went on a tour of the brewery, where we got to see the scale of the operation. It’s a 65 HL Brewhouse where they brew back to back five days a week to fill one of their 18 115HL Fermentors with their tasty beers. O’Hara’s have a great core range of beers, a Red Ale, Pale, Stout and Extra Stout. All of which produced here in Bagenalstown. We also got a sneak preview of their new beer, which is in fact a series of beers under the name Hop Adventure, which is a series of single hop IPAs, this batch featuring the legendary Sorachi Ace hop. This beer was being launched in time for both Bloom, and the Kilkenny Cat’s Laugh Festival where O’Hara’s is the official beer of the festival. Clearly this is one of the largest craft beer producers in Ireland. 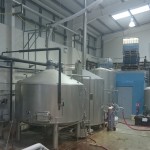 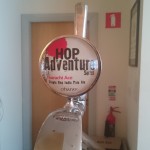 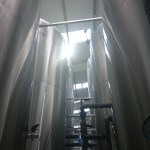 Coming back after the tour we got back to Brewery Corner, where the aforementioned Hop Adventure beer is going to be the 100th Beer that has been listed in Brewery Corner. Like a good cricket player, they are 100 not out. On tap in the bar there are 15 taps, the vast majority of these are from the O’Hara’s Range, however there were two guest beers on Metalman Pale, and Costello’s Red Ale. Costello’s a local brewer from Kilkenny, Metalman from Waterford. Seamus informed me that he is hoping to have more guest taps installed to allow for more Irish Beers to be poured here. Brewery Corner only pours exclusively Irish Craft Beer on tap, but there are lots of international beers available in bottle too. I particularly enjoyed the Leann Follain, it is one of my favourite stouts, and Janice really enjoyed the Nitro version of the Irish Red.

For those not familiar with O’Hara’s Beers, the bar staff are more than happy to give you a taste before you decide, but you can also get a flight of small sizes so you can try a few and then pick your favourite. Not only that, they also do a mean Pizza and Pie. Often bundled with a pint. Perfect pub grub, simple and tasty. That’s not all, upstairs they’ve a function room / second bar you can use for parties, and other events. It’ll be put to good use again for Cat’s Laugh Festival and later in the year for the Kilkenomics Festival.

So, Brewery Corner is 2 years old, and i’ve a feeling it’ll be around for a long time to come. With it’s laid back atmosphere, and regular events I can see why the people of Kilkenny have warmed to it. It should also be on your radar if you are visiting Kilkenny which after all is a very popular tourist spot. I’m looking forward to seeing them get to 200 not out and beyond. Sláinte.