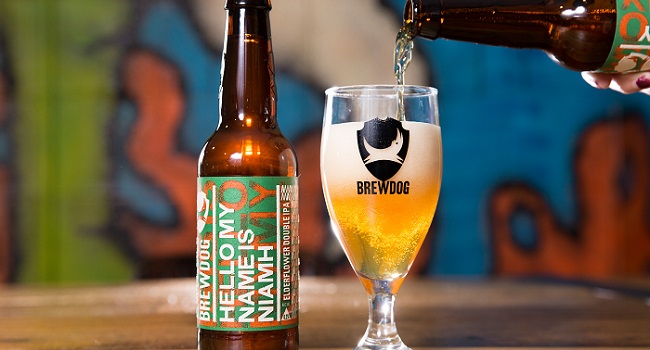 Since it opened in 2007, Scottish craft brewery BrewDog has been a strong player in the craft revolution. Today, 16th of November 2017, they’ve launch a limited edition beer brewed specifically for Ireland named Hello My Name is Niamh.

The name was crowsourced from the brewery’s Irish fans, who chose to honour Niamh, one of the queens of Tír na nÓg, and the daughter of the god of the sea in Irish mythology.

BrewDog cofounder James Watt said: “Today, Ireland has some of the most creative and boundary pushing craft brewers in Europe. The craft beer revolution keeps going from strength to strength, and we’re proud to have relationships with some of the new breweries that will define the next chapter of brewing in Ireland. We hope Hello My Name is Niamh will inspire more brewers and bring in thousands more to the craft side.”

Hello My Name is Niamh is part of a series of nine limited edition Double IPAs under the theme of “Hello My Name Is…” which BrewDog launched as a gesture of gratitude for its “passionate punks” in Ireland, France, Finland, Norway, The Netherlands, Spain, Italy, Germany, and Sweden.

All the beers in the series have a connection with the countries they’re inspired by and were named with the help of locals.

Hello My Name is Niamh is infused with elderflower, very popular and abundant in Ireland.

A pioneer in crowdfunding, BrewDog launched the fifth round of its record-breaking equity crowdfunding scheme, Equity for Punks, last month. They’re looking to raise up to €56 million to help fund their international expansion. James Watt added: “Investing into BrewDog isn’t just about seeing the value of your shares increase much faster than they would on the stock exchange, it’s about joining a global community with a purpose. From receiving awesome money-can’t-buy benefits to being part of the biggest community-fuelled crowdfunded charity contribution in history, being an Equity Punk is about being part of something with the potential to change the world.”

Ireland is a key export market for BrewDog and the brewery is currently scouting for a location for a bar in Dublin.