A sliced white pan can be bought for as little as 50c in some supermarkets with loaves on sale everywhere. Artisan breads, on the other hand, are more expensive to buy and require time if baking them yourself at home. It would be easy to fall into the trap of thinking that making your own bread is a whole lot of bother and not worth the trouble!

Although it is a craft that we have abandoned for the sake of convenience, there is something so rewarding and almost therapeutic about baking your own bread. More importantly, it is also fun and something that you can incorporate into your life whether on a daily or weekly basis. Whilst many of us can throw together a fairly presentable loaf of soda bread, the ultimate bread making experience really comes with making your own yeast-risen and sourdough breads. The bread you bake will taste so much better than those cotton-wool like, mass-produced supermarket offerings and won’t be pumped full of preservatives, E numbers etc.

At its most basic, bread contains four ingredients; flour, yeast, salt and water. With this in mind, I urge you take a look at the list of ingredients on the back of your supermarket loaf… Alarming to say the least!

It was armed with these thoughts and a desire to learn more about baking my own bread, that I signed up for the one-day bread making course run by the Firehouse Bakery & Bread School on Heir Island off the West Cork coast. The bakery was set up by Patrick Ryan and Laura Moore in 2012 and in addition to the course on Heir Island, evening courses are also run at its main premises in Delgany, County Wicklow. Arriving at the bakery school, I noticed a clay wood-fired oven and, as I passed by, I could feel the intense heat emanating from it. During the day, we would bake some of our breads in this oven but also in the domestic-style ovens in the school. Patrick explained that the wood-fired oven had been lit early in the morning to build up the temperature. He also showed us how inwardly it retained its heat but because of its construction the outer walls still remained cool to the touch. 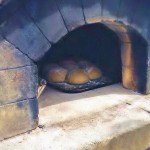 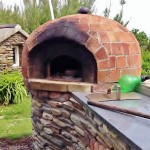 The first bread we attempted was a sourdough loaf using a starter. Although the starter was provided, Patrick gave detailed instructions to us on how to grow our own and I am happy to report that the one that I began when I got home is coming along very nicely!

We mixed together all our ingredients and then started kneading our doughs. During that ten minutes or so all you could hear was the slapping of the dough against the wooden table as we concentrated on working the glutens in the flour. We were shown how to check whether our dough was ready by using the ‘window-pane’ test and once this stage was achieved, our doughs were set aside to prove and allow time for the natural yeasts within the sourdough starter to begin working. We would later knock the air out of the proved dough and allow it rise for a second time in special proving (banneton) baskets before being baked in the wood-fired oven. We then moved on to breads made using fresh yeast. Each of us was tasked with creating a different flavour/type of bread. Between us we made a variety of breads, including baguettes, cinnamon rolls, savoury pinwheel rolls, potato & rosemary flowerpot bread, foccacia and granary ‘tear-and-share’ rolls. We were shown how to form and shape the proved dough to create loaves, rolls and baguettes. Not all breads use yeast and require kneading and proving. Soda bread is something that is quintessentially Irish and we would all be familiar with the brown and fruit versions, but Patrick showed us how adaptable and versatile it can be. Soon we were mixing up a range of these ‘quick’ breads, including thyme, mustard & cheddar soda bread, stout & treacle soda bread with oats & walnuts and apple & cider soda bread. We also made savoury muffins and the most fabulous honey, blue cheese & walnut soda bread. By this stage the heady aroma of all these breads baking was swirling around us in a very enticing way. To finish up, we were all given different sweet recipes to make. Again we all baked something different from randomly selected recipes. Very soon I was mixing up the ingredients to make a fabulous chocolate orange cake but around me the others were making a range of goodies including coconut kisses, flour-free orange cake, Bailey’s chocolate chip cookies and pistachio financiers. As ever, Patrick was keeping a watchful eye on proceedings and offering guidance when needed. If doing the course on Heir Island, I strongly recommend taking some extra time to explore the island and the beautiful landscape around West Cork. Hostel and self-catering accommodation is available on the island and Patrick and Laura will be happy to give you further details about this when booking a course. One word of warning, places get booked up quickly, so do keep an eye out for new courses being announced on the bakery’s website. 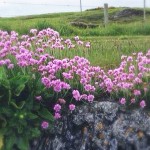 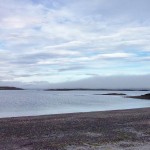 The course was informative, great fun and I learnt a lot. Perhaps the most important thing that I took away from it was a new-found confidence in baking my own bread; I can now see that this is something that is completely achievable in my own kitchen using a domestic oven. Since returning home I have managed to source a local bakery who kindly sells me small amounts of fresh yeast and I have been happily baking away producing a wide variety of different breads which are being eagerly gobbled up by my gang! At €110 for a full day’s hands-on baking under Patrick’s guidance (which includes the cost of the ferry to and from the island) I think that this course represents real value. Numbers are deliberately kept small with no more than 6 or 7 places on each course. This definitely encourages better group interaction. All ingredients and utensils are provided and also included is lunch which made by Laura, was absolutely delicious. You will also receive a Firehouse Bakery bag containing a dough/bread scraper and copies of all the recipes that you and the other participants cooked during the day… Oh, and make sure to bring something with you to carry home all the bread that you bake, because you will be leaving laden down!