Brandy Snap Basket Recipe by The Chefs at The Brehon 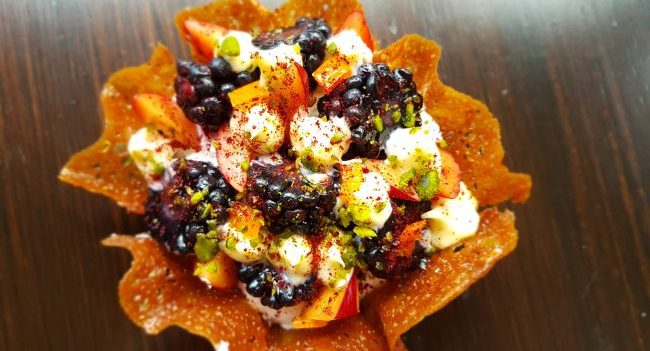 You can’t beat a simple classic and this Brandy Snap Basket is the perfect dessert for some quick and easy indulgence.

Utilising fresh fruit, cream and custard, the brandy snap recipe was devised by the Chefs at the Brehon hotel. You can change the fruit depending on the season to ensure you have a sweet treat all year round.

1. Put the butter, sugar and golden syrup in a pot on medium heat. When it reaches boiling point, add the dry mix (flour, ginger and cinnamon).
2. Let it cool. Divide the mix into 20g balls and press flat on a tray lined with a silpat. Take out from the oven when it has reached golden colour. Use mould to make the basket shape.

1. Put the milk with the vanilla pod in a pot and bring to the boil. Mix the yolks with the sugar and corn flour.
2. Start tempering the yolks by adding little by little from the boiling milk. Add the yolks to the milk in the pot and keep cooking until the corn flour is completely cooked. Cool down. RECIPE BY THE CHEFS AT THE BREHON Currently the Executive Head Chef at Danú Restaurant in The Brehon, Killarney, Chef Chad Byrne has extensive experience working in renowned establishments such as the Michelin Star restaurant Ristorante Semplice in London, the five star Heritage Golf & Spa Resort in Killenard, The Killarney Park Hotel and The Clarence and Merrion Hotel in Dublin.

Chad was awarded Irish Gastro Chef of the Year in 2012 along with a Gold Medal from Chef Ireland 2012 and has also represented Ireland in the culinary Olympics in Errfurt Germany. Danú Restaurant holds 2AA Rosettes and Chad runs the kitchen with the ethos of food, focus and fun.