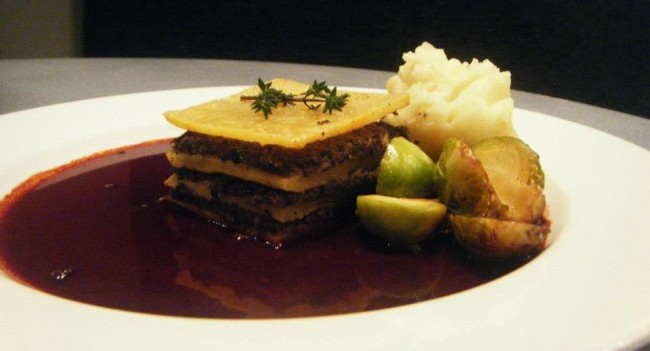 This recipe of Braised Turnip Galette of Chestnut & Portobello Mushroom with Beetroot Port Gravy and Roast Parsnip Mash the star of the Winter menu at Café Paradiso. Over the past few years, this galette has become one of those dishes that not only mark the coming of Winter but actually make us look forward to it. Like asparagus dishes in the spring, we begin to talk about the turnip galette about a month before it is decent to do so, before the clocks fall back and while there is still a small chance of the occasional warm day. In local timekeeping, when the jazz festival is done and dusted, that’s turnip time. Not only is the humble turnip the focus of this elegant main course, it is also the part you have to get right for the dish to work. Get your turnips right and the rest of the dish falls into place.

For the Turnip Galettes:

1. Preheat an oven to 220c/420f. Place the mushrooms on an oven tray, brush them with butter or olive oil, season with salt and roast until tender.
2. Chop the mushrooms coarsely and put them in a food processor with the chestnuts. Pulse to get a coarse puree. Remove to a bowl, leave to cool and fold in the cream cheese.
3. Lower the oven to 160c/320f. Peel and trim the turnips to get pieces from which you can cut square slices with sides of about 7-8cm and about 3mm thick – four slices per portion, sixteen in all.
4. Bring a pot of water to a boil and cook the turnip slices for 7 minutes. Drain and transfer to an oven dishes, laying the slices flat but slightly overlapping.
5. Melt the butter, wine and stock together and pour this over the turnip slices. Season with salt, cover loosely with parchment, and place the dishes in an oven at 320f for 40 minutes or more, until tender. The turnip should be soft enough to yield easily to a table knife.
6. Place four slices of turnip on a parchment-lined oven tray and cover with some of the mushroom-chestnut mixture, leaving a narrow edge uncovered all round. Cover each with another turnip slice, and repeat until each has four turnip layers and three of mushroom-chestnut. Press firmly to get a flat even top. Brush the tops with butter.

For the Beetroot Port Gravy:

Simmer everything except the butter for 20 minutes. Puree and push through a fine sieve to get a clear liquid. Back on the stove, reduce this to half the volume.

For the Parsnip Mash:

1. Heat the oven to 220c/420f
2. Toss the parsnip in a little olive oil in an oven dish, cover loosely with parchment and roast in the oven for 15 minutes, until soft. Blend to a puree in a food processor, adding a little of the milk if necessary.
3. Steam the potatoes until soft. Warm the milk and butter together in a pan, then mash this into the potatoes. Stir in the parsnip and season with salt and pepper.

Place the galettes in a moderate oven to heat through for 7-10 minutes. Bring the beet stock to a boil and whisk in cold unsalted butter to get a smooth slightly thickened sauce. Place a galette on each of four plates and pour a generous pool of sauce around. Finish with a small mound of parsnip mash.

The nose is beautiful, full of lush purple and blue fruits. It is fresh and very inviting.

The palate is dominated with lush berry fruit such as blueberries, cherries and some fruit spice which appears the longer it is open. This wine has great structure and balance. A super offering from a great winemaker.

This wine will match the fruitiness of the sauce but also with the earthy autumnal flavours from the turnips and mushrooms. Decanting will bring out the spicier side of this wine. Born in Macroom, Co. Cork, Denis Cotter worked in banking for eight years before  leaving to follow an ambition to work with food. Being a vegetarian already, this led  him to London and the famous Cranks restaurants, where he first donned a chef’s  apron. He opened Café Paradiso in Cork in 1993 with the ambition to create an  environment where he could evolve a personal style of cooking focused on the pleasure  of food rather than the perceived negativity of vegetarianism. Café Paradiso now has   an international reputation for its imaginative and unique cuisine based on local  vegetables and cheeses. Denis has written four award-inning cookbooks: ‘The Café  Paradiso Cookbook’ in 1999;‘Paradiso Seasons’ in 2003, ‘Wild Garlic, Gooseberries &  Me’ in 2007 and ‘For the Love of Food’ published in 2011. Denis continues to work as  executive chef of Café Paradiso, as well as pursuing writing, teaching and consultancy  work.