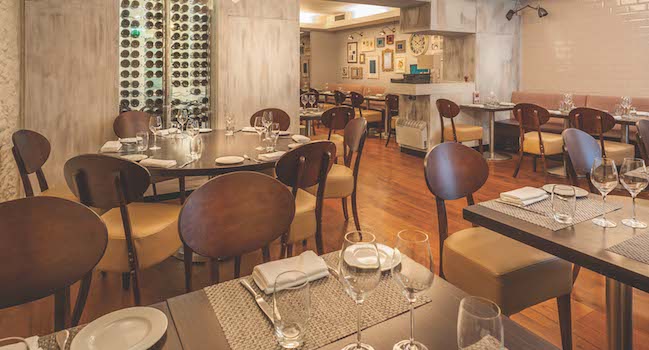 There are a few names when it comes to the Irish chef scene that need very little explanation, Oliver Dunne would certainly be one of them. Never one shy of courting controversy, Dunne has spoken openly on his decision to hand back his illustrious Michelin Star and instead focus on less fuss and more casual offerings.

It is quite apt that we decided to visit Dunne’s original Michelin venue Bon Appetit this month, which he first opened over ten years ago. It is certainly not an easy feat to keep a suburban restaurant fresh and exciting and still be able to pull in the punters in a very crowded scene with over 40 restaurants to compete with on his door step.

So why apt you might ask? Well you may have been able to avoid the fanfare over the new Glovers Alley restaurant that just opened last week and if you did you were one of the few. The property was once home to Thornton’s but prior to this some will remember it as Peacock Alley where ironically a young Oliver Dunne cut his teeth in the late 90’s under Conrad Gallagher, another name controversy follows for his outspoken views. And so when one venue opened with Michelin very much in its sights we ventured out to the nautical burbs of Malahide to check out how Bon Appetit has evolved.

First impressions were very different from what we last remembered, the first floor that once housed the linen table cloth laden room is now used as office space for Dunne’s expanding restaurant group which includes Cleaver East and Beef & Lobster, although plans are in place to use this for their popular Afternoon Tea settings. The ground floor is still a smart bar but now with good value wines and small plates for sharing. The basement is now Dunne’s main restaurant space, we arrived to a full house on a busy Saturday night and Malahidians were out in full, glam force. The space is warm and bright, which for a basement can be a challenge, but two Georgian style windows allow plenty of natural light to flood in.

Dunne is passionate about continuing to evolve and when we arrived a new vegan menu was being added to cater for the rise in diners looking for healthier, more ethical options, a trend we are seeing more and more of, particularly in Dublin city centre.

To most meat-loving carnivores like us, the word vegan can send shivers down spines (no offence) however more and more people are choosing this as lifestyle choice rather than for their love for our furry friends. Either way it has encouraged chefs to create more interesting dishes, the challenge is not to be bland but still be cost effective. Not just ready for the full vegan onset, we opted for a first course which was at least vegetarian, baby steps and all that, which proved to be a rather delicious choice. Who doesn’t love a Cornetto, right? Well the team at Bon Appetit apparently do as they cleverly packaged up our Fivemiletown Goats Cheese Mousse (€10) into glorious little curried cornettos, well matched with some salt baked beetroot and anise pickled berry. Across the table, under envious eyes an interesting looking Crab and Spiced Red Pepper Cannelloni (€13.50) appeared, lightly textured with a creamy consistency and served with a pleasant roast tomato, pine nut and caper dressing. This quirky dish ticked all the boxes and it is refreshing to see a chef not afraid to experiment and try something different. It seemed only fair if one of us was going for the vegan main that the other would experience the full protein effect of a good old 40 day dry aged Rib Eye, which at €26.50 in these parts is very well priced for a good piece of Hereford beef.

The team keep this crowd pleaser fairly simple, a vine of slow cooked piccolo tomatoes and some peppercorn sauce and on our server’s suggestion we indulged in a decadent side of creamy mash with sweet onion gravy and tiny strips of crispy beef. Eventually the vegan option had to have its day in the sun and actually this may make us seriously consider more vegan options in the future. Saffron Potato and Green Bean Lime Leaf Curry (€19.50), cardamom pilau and a simple spiced mango and pineapple chutney – if this is the vegan life we’ll take it. A hearty, luscious plate with every last scrap mopped up without any shame.

The wine list at Bon Appetit is brief but very good value, personally we would love to see one or two more adventurous additions being added in the future, that said we were happy enough with our bottle of 2016 Domaine Delsol Picpoul de Pinet (€35), a vibrant drop that cut through the heat of the curry with its well balanced acidity.

We passed on dessert although we were tempted to give the Raw Vanilla Bean Chia Pudding a go, perhaps next time, but more than likely the Port and Clementine Trifle would’ve swung the final decision.

Bon Appetit as we now know it is a huge departure from its Michelin days and we think that’s a good thing, in a suburban locality with lots of families dining out on a regular basis this new informal, fun and good value offering is far more in tune with how the Irish restaurant scene has evolved and this is one example truly living up to its name .

Dinner for two with a bottle of wine came to €108.