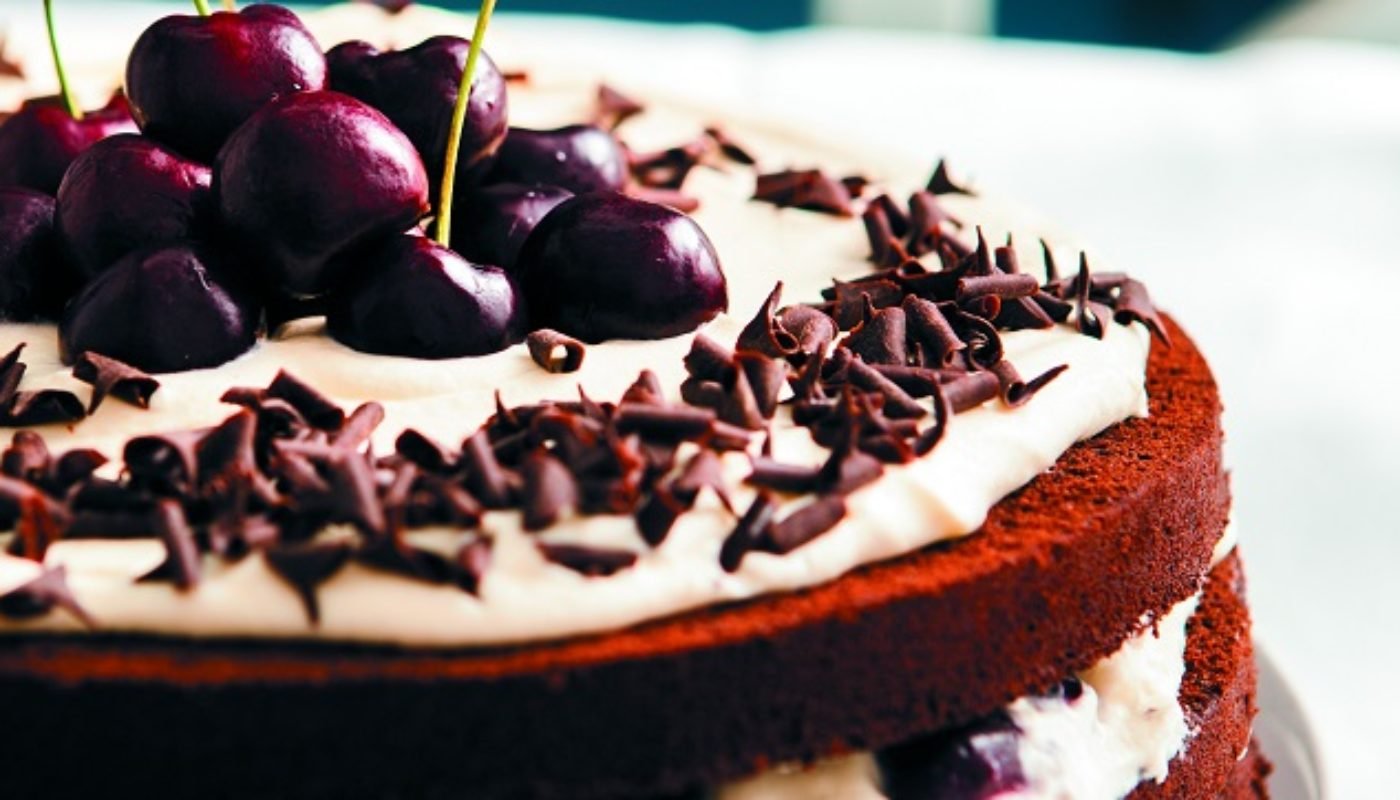 Black Forest gateau is a classic cake and there are many versions that don’t do it credit. I hope you’ll agree that this recipe does!

1. Preheat the oven to Gas Mark 5/190oC/375oC. Grease three deep 18cm/7” diameter round cake tins and line the bases with baking parchment.
2. Place the eggs and sugar in a large mixing bowl and beat with an electric mixer for about 10 minutes until the mixture is thick and pale.
3. Separately, sieve together the flours, gum, baking powder and cocoa powder three times to ensure there are no lumps, then sieve again into the whisked mixture. Fold in very gently, then slowly trickle in the melted butter/margarine and continue to fold in gently.
4. Divide the mixture between the tins and smooth the surfaces with a pallet knife. Bake in the centre of the oven for about 25 minutes, or until springy to the touch.
5. Leave in the tins for about 5 minutes, then turn onto a wire rack, gently peel off the lining paper and leave to cool.
6. Lay the sponges on an even work surface. Sprinkle the three layers with the Kirsch to moisten the sponge.
7. In a large bowl, whip the cream until it forms soft peaks. Transfer two-thirds of the cream to another bowl and stir in the chopped cherries. Place a layer of cake on a serving plate and spread over half the cherry cream. Top with another layer of cake and the rest of the cherry cream, finishing with a layer of cake.
8. Use the remaining whipped cream to cover the top of the gateau, spreading it evenly with a knife.
9. To decorate the gateau with chocolate shavings, melt the chocolate in a bowl over a pan of hot water, then spread the chocolate out on a plastic chopping board and allow it to set.
10. Using a long sharp knife, scrape along the surface of the chocolate to make thin shavings and use these to decorate the top.
11. Finally, arrange the cherries on top of the gateau. A former investment banker, Denise was inspired by her dad, Michael to set up her bakery. What began as a home-cooking passion to support his gluten intolerance, Denise was inspired to open Ireland’s first gluten-free artisan bakery in 2008. The country’s leading producer of breads and baked treats for Coeliacs and those following a ‘free from’ gluten, wheat, dairy and yeast free lifestyle, Denise’s Delicious Gluten-Free Bakery product ranges are available from the major multiples and also feature on the Aer Lingus Premier menu.

Denise’s baking demonstrations regularly feature on TV3’s Ireland AM and she also recently appeared in Neven Maguire’s RTÉ ‘Healthy Home Chef’ series in his programme on Gluten-Free. Denise is author of ‘Delicious – Recipes from My Gluten-Free Bakery’ (Mercier Press).