Behind The Bib – A Night in the Kitchen at Richmond 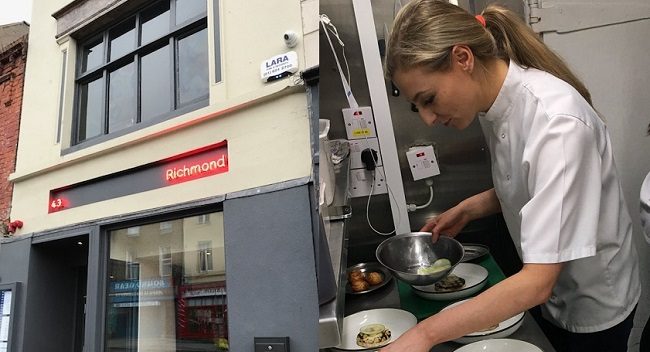 It has been an exciting few weeks for Dublin restaurants, with four new additions to the illustrious list of Michelin Bib Gourmand holders, confirming the whispers of many that Dublin dining has never been more exciting. The Bib, which recognises “exceptionally good food at moderate prices”, is a guiding light for many when choosing where to enjoy their next meal and has never steered me wrong.

I often wondered what it takes for a small eatery to achieve a standard which has the Michelin inspectors scratching their heads as to how such fantastic food can be served at such accessible prices, a challenge which although different to the Michelin Star criterion, is unique in setting a defined price threshold. While starred restaurants can and do make ample use of foie gras and fresh truffles as well as a troupe of kitchen staff, the Bibs have to be that little bit more inventive in their pursuit of deliciousness and keep a hold on the purse strings when it comes to dreaming up dishes and delving out duties.

With this in mind, I headed to one of the quad of newly crowned Dublin eateries, Richmond, to discover what is behind the Bib, how a restaurant open for less than two years managed to nab one and explore the dynamics of one of Ireland’s top restaurants.

The home of Tasting Tuesdays, I arrived at 5pm for what is a traditionally quiet evening in restaurants across the country only to be informed by Owner and Front of House Russell Wilde that there are 55 covers booked in and it is going to be by no means a soft start to the week. 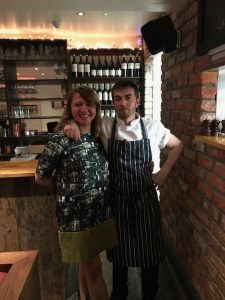 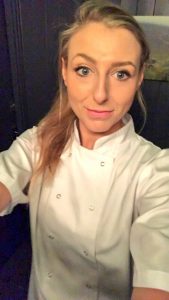 Spotting me from inside the semi-open kitchen, Head Chef David O’Byrne comes to greet me and give me whites for the night and I head off to change, unsure what lies ahead. Wondering if the hush in the empty fairy light dotted, red leather and exposed brick accented dining room is the calm before the storm, I ponder whether I’ll be more of a hindrance than a help.

Fake it til you make it, they say, and this sage advice rings in my ears as I walk into the small but perfectly organised kitchen and meet David’s right hand man, Sous Chef Danny Hannigan, a close friend since their days together in Mulberry Garden, and Caroline Ramos, who David explains began her career in Richmond as a kitchen porter a year ago and has recently transitioned to chef duties. “David is always keen to ensure progression is at the forefront of our minds here” explains Danny. The trio are warm, welcoming and clearly close knit and as David begins to talk me through the five course set tasting menu for the night I begin to get excited about the challenge ahead. I spot a mini Michelin Man statue (or Bibendum, as is his proper title, hence the Bib) sitting proudly on the shelf and take advantage of the lull before the first guests arrive to find out about the day the Richmond earned its stripes.

On a recent Friday afternoon, the news that Dublin’s newest Bib was to be awarded to Ciaran Sweeney’s Forest & Marcy came as no surprise to David and Danny but next came a tweet from Michelin beginning with the words “From greasy spoon to…” and set emotions racing. Danny was convinced that was it, as David calmly continued to prep for the service ahead. Barry Fitzgerald’s Bastible took the accolade. Next came Craft in Harold’s Cross, as Ireland’s newest Bibs were announced torturously one by one over 140 characters. 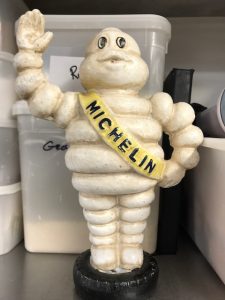 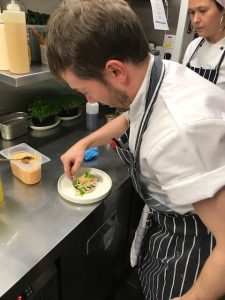 And then, a flash on a phone gave new meaning to Happy Friday to David and Danny, who erupted in to bear hugs, cheers and exuberance as Richmond joined the illustrious club of only 26 restaurants across the country to bear a Bib. “Its not hard to see why Richmond is packed every night of the week” tweeted the inspector, apt, as the dining room quickly begins to fill up for a busy service.

Couples on date night, groups of food-loving friends and a familiar face for the staff, a lady who has returned for her second solo Tuesday Tasting in as many weeks, take their seats for the five course feast which will set them back just €33 – likely the most competitively priced menu of its kind in the city. David talks us all through the menu, which the trio have prepared extensively for since 11am with mis en place ready to go, and Caroline, or Ca as the guys call her, is assigned to starters with help from myself. Demoing an intricate dish of Roast Celeriac, Celery, Apple, Quince and Nut Crumble, we get to grips with plating the dish of 7 different elements exactly how chef likes it – simple repetition, surely?

Not so, I find, as my first blunder of the evening occurs in the form of failing to drain the juice from a sharp apple pickle, meaning two of my starters have to be re-plated. Encouraging and unlike the primadonna chefs we imagine occupy such kitchens, David explains gently that he would sooner have the customer wait an extra few minutes and get it right than send out an imperfect dish.

I get the hang of it, working alongside Ca, who is as efficient and determined as she is lovely, and David is quick to delve out praise when the dishes come together, creating a light-hearted and upbeat atmosphere – essential for close quarters like this. The second starter, a Hegarty’s Cheddar Bun with Bacon and Crispy Chicken Skin reads like a dream and is simple yet elegant – a plump gougére here, a shard of delectable crispy skin there and dollop of bacon jam to tie it all together in an umami-bomb of a dish. As the dishes hit the pass, David is snapping them in all their glory for Richmond’s social media feed – a savvy chef who knows just how to tempt diners in the door with drool-worthy dish pics.

Conceived as a way to get diners in the door rather than to turn profit, the Tuesday Tasting has been a roaring success, as attested to by the thronged dining room, buzzing like a Saturday night. David and Danny use this as a litmus test for dishes being considered for a permanent place on the evolving a la carte, and Russell pops his head in with feedback from guests regularly so the kitchen can gauge which ones are keepers. The next dish, Trout, Clam, Mussel, Salsify, Roe and Fennel Cream, is pretty as a picture so long as I haven’t plated it – the artful cream smear proving more difficult than it looks – and word from the dining room is that this is a fish dish so good it has converted a devout seafood avoider. A winner all round.

To ensure my back evades mirroring the burnished and blistered skin of the trout under the Salamander, “Chaud!” is frequently uttered and always taken heed of, and I realise that the seemingly simple dishes are in fact littered with clever details and techniques, far from effortless, despite the relative calm in the kitchen. While David mentions the times when things get rough in the kitchen and “running around like a blue-arsed fly”, it is tough to envisage as the trio move seamlessly through courses on to the main event – Game Sausage, Buttered Leeks, Parsnip and Black Cabbage.

Danny talks me through the process, braising the sausage, comprising of venison shank, boar and rabbit, in a lacquer of veal jus, as we chat about everything from restaurant recommendations (Host in Ranelagh is top of the list) to his time in various kitchens and how the Tuesday Tasting and the recipe development that comes with it each week keeps things exciting and fresh not just for the diners, but for the chefs themselves – experimenting, creating and improving each passing week. The verdict from the diners is that Game Sausage, all fifty five tempting plates of it, is the runaway favourite – a dish comprised of cheaper, seasonal cuts elevated to their full potential by David’s flair for creating flawless combinations – it is not the price of the menu, but rather the content, which keeps diners coming back for more every Tuesday. My final task of the evening is the most challenging, as David sees fit to allow me take the reigns in the pastry section (he obviously never watched the Great Irish Bake Off), plating up Cocoa Meringue, Blackberry, Pistachio Mousse.

After numerous dodgy sorbet scoops and espuma escapades, David’s encouraging words pay off and I start to plate groups of seven at a time without feeling like a failure, getting into the groove and even calling orders away – a satisfying feeling indeed. As the night winds down, it is difficult to believe the amount of dishes which went out without a single word of negative feedback and without the trio ever really breaking a sweat – perfection, it seems, comes naturally at Richmond.

“The Dublin food scene is booming at the moment, it is outrageously good now and the standard has increased dramatically, but its not dear. You can get high end food at value prices and all you are missing is the stuffiness,” says David when I ask what the surge of Bibs means for the city before hanging up my whites.

Behind this Bib lies ambition, drive and commitment to excellence on every well thought out plate, every time – Michelin was right to attribute the full house effect here to the exceptional dishes on offer, having visited on three occasions before the award was granted. As I salute Bibendum on my way out, it is very obvious why he has taken up residence at Richmond.