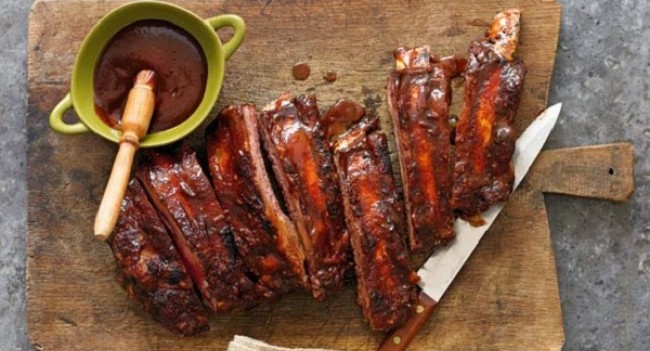 This is an incredibly tasty beef short ribs recipe that is the perfect comfort food to eat anytime of year. Slow cooked, fall off the bone beef, coated in a sweet and a sticky BBQ glaze makes this beef rib recipe truly irresistible. Go on, spoil yourselves!

1. Mix all the ingredients above in a bowl (the meat as well), cover with cling film and allow to marinate in the fridge for an hour before cooking.
2. Preheat the oven to 170C.
3. Place the whole lot into a cooking bag and onto a roasting tray. Cover with tin foil.
4. Cook for hour and a half to two hours keeping an eye on them every twenty minutes.
5. Depending on the size of the ribs they may take longer in the oven.
6. Once the meat is nearly falling off the bone they are perfect to eat.
7. For the last 10-15 minsuteswhack the oven up nice and high to 190C and remove the ribs from the cooking bag, to allow the marinade to caramelize and get crispy and sticky.
8. Serve with some dressed rocket, parmesan shaving and halved cherry vine tomatoes.

Chef Adrian a young Irish chef from Cavan who is passionate about food and cookery.He is currently Ambassador for the Associated Craft Butchers of Ireland which covers local butcher shops and artisan food stores.Starting at a very young age, he trained in some of Ireland’s most renowned restaurants including Neven Maguire’s Mac Nean House (6 years) and Bon Appetit (1year). He also holds a degree in culinary arts from the School Of Tourism Killybegs. He now travels the country working on food education for Primary and Secondary Schools with regular weekly visits and cookery demos. Creation’s by Chef Adrian – work with food businesses, butchers, deli’s and restaurants on menu and product development. He regularly hosts Cookery Demonstrations for Charities, GAA Clubs, ICA Groups, Festival Communities and Schools. Adrian has compiled recipes in Woman’s Way Cookbook, Food For Thought, Woman’s Way Magazine and The Anglo Celt. His very own tv show “Chef Adrian the Craft Butcher Chef” was aired each week with 6 episodes in December 2014 and January 2015 on Sky 191 and Free Sat 400. He appears regularly on TV3’s the Seven O Clock Show where he cooks with a Celebrity guest and promotes what events are coming up in the week. The show is hosted by Lucy Kennedy and Martin King. In May 2015 Adrian took his place in the Guinness Book of Records for the worlds largest potato pancake as part of Coeliac Awareness Week. Adrian was voted by Joe.ie in the top 15 rising stars of 2015. Adrian has teamed up with RTE in March 2016 to produce 10 videos for the RTE Player Food Bites which have been released on the 22nd of March themed “Fakeaway with Chef Adrian”