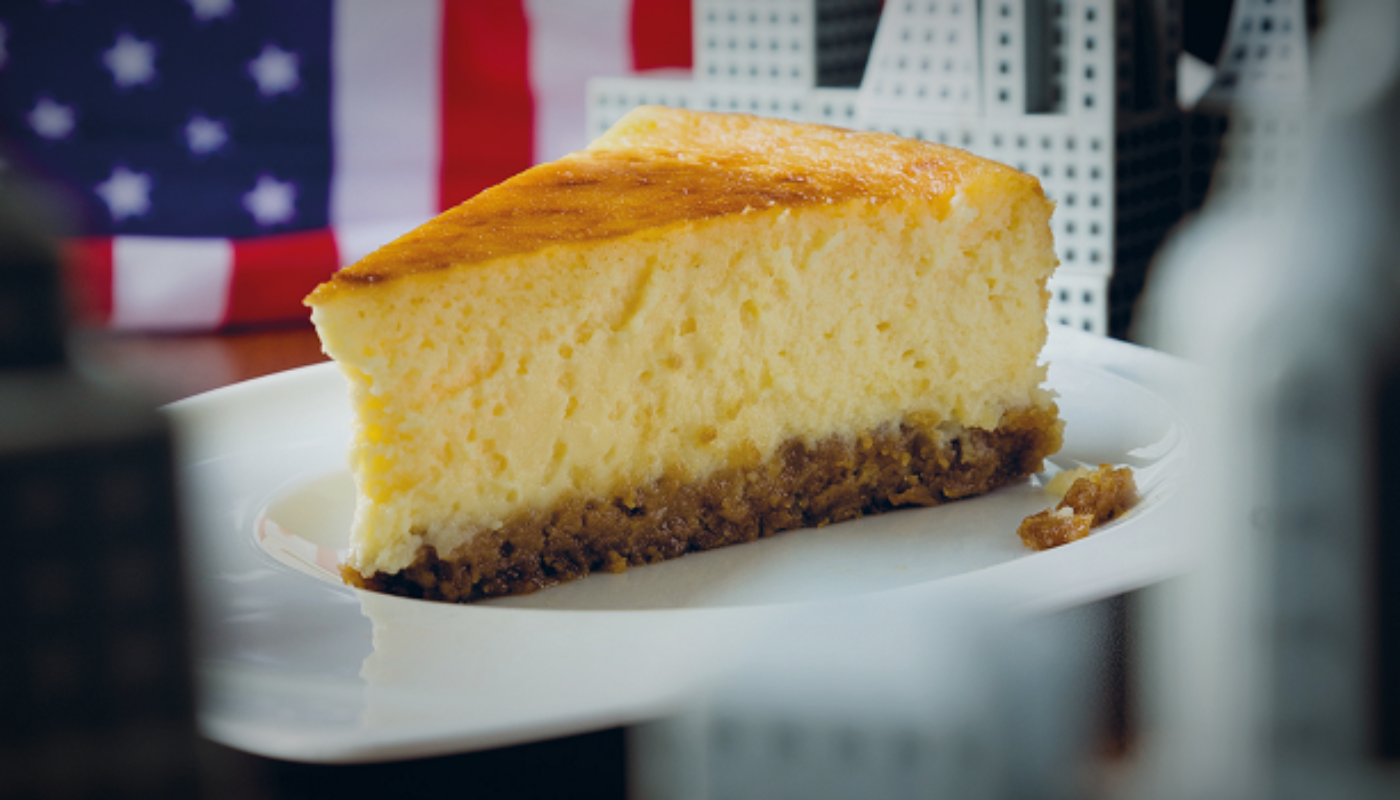 This Classic baked New York cheesecake recipe is one of my all-time favourite desserts. I’ve had cheesecakes all over the world – set cheesecakes, deconstructed cheesecakes, etc. etc. – but none, and I mean none, compare with a classic baked New York cheesecake. During one of the rounds on MasterChef, we had to come up with a dessert on the spot, and straight away I made a set cheesecake. It’s easier to make than the baked one, so I thought I’d have a go, I’d never made one before then. I knew when both Daniel and Robin tasted it that they wished it was a proper baked cheesecake, and it got mixed results. So this recipe is for them. I promise I’ll cook it for them next time I see them. Now, this recipe takes a little time and effort and you need patience, but I promise you it’ll be
worth the effort.

1. Preheat your oven to 175°C.
2. This recipe will fill an 11-inch baking tin, and make sure you use a springform tin: it’ll make your life a lot easier when trying to get the finished cheesecake out!
3. Grease the bottom of the tin with a little butter or oil, and line with greaseproof paper.
4. Pulse the gingernut biscuits in a food processor and add the melted butter until you have a mixture similar to wet sand.
5. Spread the mix into the tin and press down until level and firm.
6. Cook in the oven for 15 minutes.
7. Make the cheesecake mix while you’re waiting for the base to cook. Clean your food processor, then add everything apart from the eggs and blend.
8. Add the eggs in one at a time and be careful not to add the next egg in until the previous one is mixed through, or your filling could split. Add all of the eggs until mixed through thoroughly.
9. After 15 minutes’ cooking, the base should be ready, so remove from oven and up the temperature
to 220°C.
10. Pour the mix in on top of the base and place in the oven for ten minutes.
11. After ten minutes, turn the oven down to 100°C and cook for a further 50 minutes.
12. Turn the oven off, but leave the cheesecake in there to cool down for about an hour. Then remove it from the oven and allow it to cool completely.
13. Put the cake into the fridge for a minimum of two hours, but overnight is best.
14. I know it sounds like a lot of time, and believe me, the temptation to eat it straight away is
huge, but have patience, my friends: good things come to those who wait. Simon Delaney is one of the best known faces on Irish TV. From his break-through role in RTÉ’s comedy drama series Bachelor’s Walk to roles in TV favourites such as The Fall, Mooneboy and Coronation Street. In 2016 he starred in one of the highest grossing films of the year, the horror sequel, The Conjuring Part 2. Simon is about to reprise the role of Dublin’s most quoted Da, Jimmy Rabbit, on stage in The Gate Theatre, Dublin the theatrical version of The Snapper.

Simon can be seen alongside Anna Daly every Saturday & Sunday morning on Virgin Media One’s Weekend AM, where he talks sport, current affairs and most importantly food! As an actor, life on the road has given Simon a taste for trying new dishes everywhere he went. It wasn’t until he worked in New York on hit TV shows like The Good Wife and films such as Delivery Man that he fell in love with classic American diner food. Published in 2017 SIMPLY SIMON’s – THE DINER COOKBOOK is his love letter to his favourite diner dishes.

Simon has taken to the stage again at Dublin’s Gate Theatre with a second run of The Snapper. The world famous book and film was adapted for the stage last year by its author Roddy Doyle. Simon is once again taking on the role of Dublin’s most quoted Dad’s Jimmy Rabbite. The show had its preview performance on Thursday June 6 th and will run until the end of August. Simon can next be seen donning an apron at The Taste of Cavan, one of his favourite food festivals.

The recipe above is taken from his best -selling cookbook, Simply Simon’s – The Diner Cookbook.