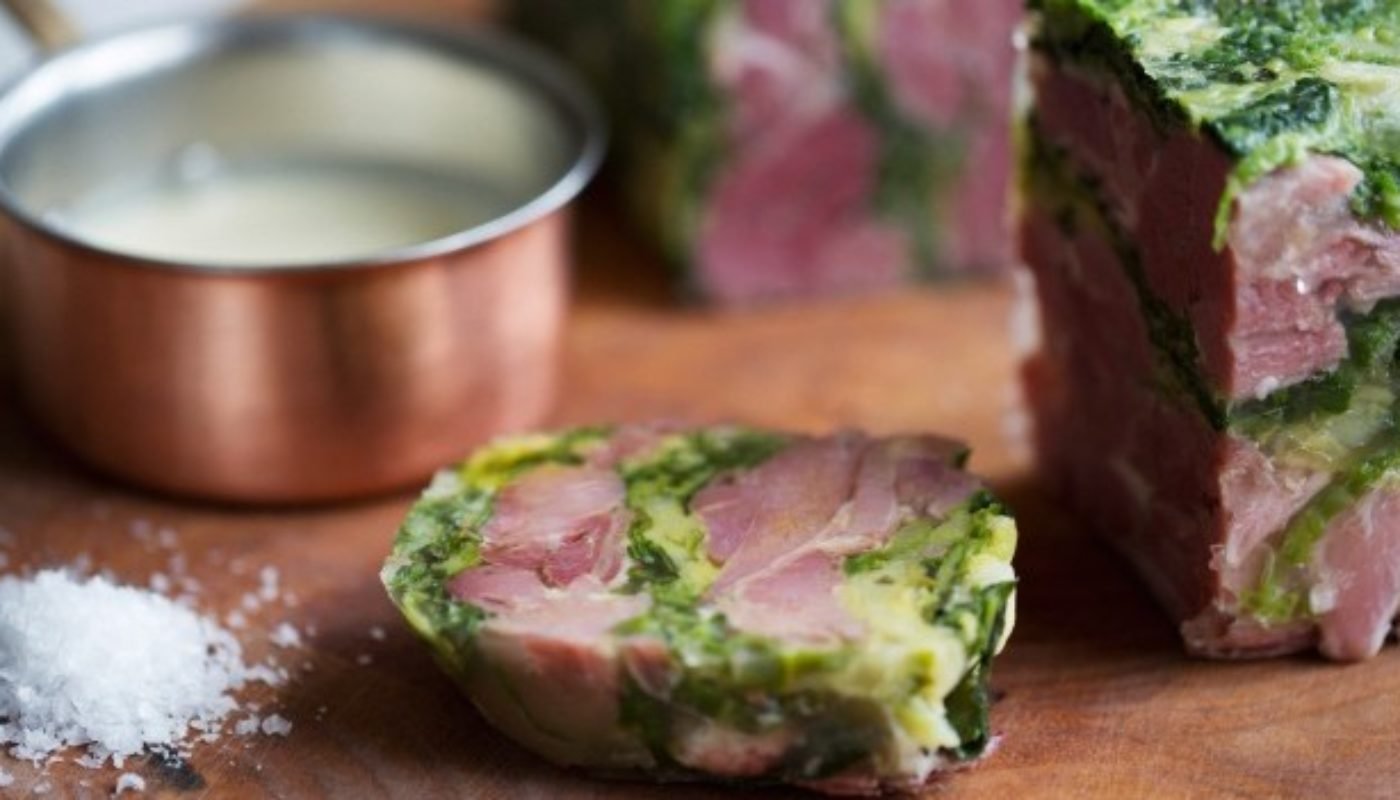 Having been diagnosed as a Coeliac in 2012, I had to renew my approach towards cooking. With gluten being a main ingredient in so many products, I was left with little option other than to devise ways around this through working on recipes with ingredient replacement. Through trying, testing and tweaking in The Olde Post Inn kitchen, I have never had to compromise on the taste or quality on everyday favourites. At the moment, I’m really excited to be working on my coeliac friendly book with Gill & MacMillan which will be on shelves in Spring 2016.

Method
1. Place Ham hocks in a large pot with enough water to cover them. Add bay leaves & star anise and bring to the boil before simmering for three hours
2. Prepare cabbage by washing it, removing the large stalks, and cutting thinly
3. Once the meat falls off the bone of the hocks, it is cooked. Remove the hocks from the cooking liquid and leave to cool slightly
4. Prepare one terrine tin or a pan loaf tin, by lining with layers of cling film
5. Pick the meat off the bone and remove any grizzle or pieces of fat
6. Blanch the cabbage in the cooking liquid from the ham hocks, leave to cook for 3-5 minutes
7. Once cooked, strain the cabbage from the liquid ensuring the liquid is retained.
8. Layer the tin with alternative pieces of ham hock and cabbage. Once completed, the tin should sit over the top by about 1 inch
9. Pour the cooking liquid over the terrine ensuring the last layer is covered firmly
10. Wrap the terrine with the cling film, keeping it tight
11. Refrigerate overnight with a heavy weight placed on top to press the terrine
12. Ensure terrine is firm and set before removing from the terrine tin. It can take 24 hours to set properly

Method
1. Sweat the leek, onion and celery together with butter
2. Add the bay leaves, star anise, cardamom and peppercorns
3. Add the cream and bring to the boil, simmer on a low heat for 5 minutes
4. Remove from heat and stand, then pass through a fine sieve
5. Season to taste and add chives

To Serve
1. Slice the terrine with a sharp knife about 1” thick
2. Heat in preheated oven for 3-4 minutes, it should be just warm but not overheated as it will fall apart
3. Place a slice of the terrine on a plate and spoon a little leek cream beside it

Our recommended Wine Pairing for this Recipe

This is a great organic chardonnay has floral and lime characteristics intermingling with ripe pears and brioche notes.
The palate has a soft richness to it with peaches, pears, red apples, citrus notes and a light vanilla buttery touch with the addition of lees aging giving the wine a wonderful complexity.

This wine will pair so well with this dish as it has the body to support the meat and the fruit and citrus notes to balance with the cabbage and undertone of star anise. Less than an hour from Dublin and just minutes from Cavan town, Head Chef and Owner Gearoid Lynch runs the award-winning fine-dining restaurant and Guest House ‘The Olde Post Inn’ alongside his wife Tara. Renowned for its fine food, genuine hospitality and luxurious surroundings, The Olde Post Inn is steadfastly becoming one of Ireland’s favourite fine-dining venues. Ideally nestled in the picturesque hamlet of Cloverhill, guests can soak up the atmosphere of the Old Post building which dates back to the 1800s.

Having begun his training in Killybegs Tourism College, Gearoid went on to work in some of Ireland’s most esteemed Michelin starred food venues such as Thornton’s Restaurant in Dublin and Pied a Tere of London. He also trained under John Howard of the elusive Le Coq Hardi restaurant in Dublin and spent time in Le Lister of Luxembourg.

Gearoid is passionate about genuinely championing local food producers and their ingredients are used throughout menus at the restaurant. The majority of produce used in The Olde Post Inn is sourced from within a ten-mile radius of the restaurant.