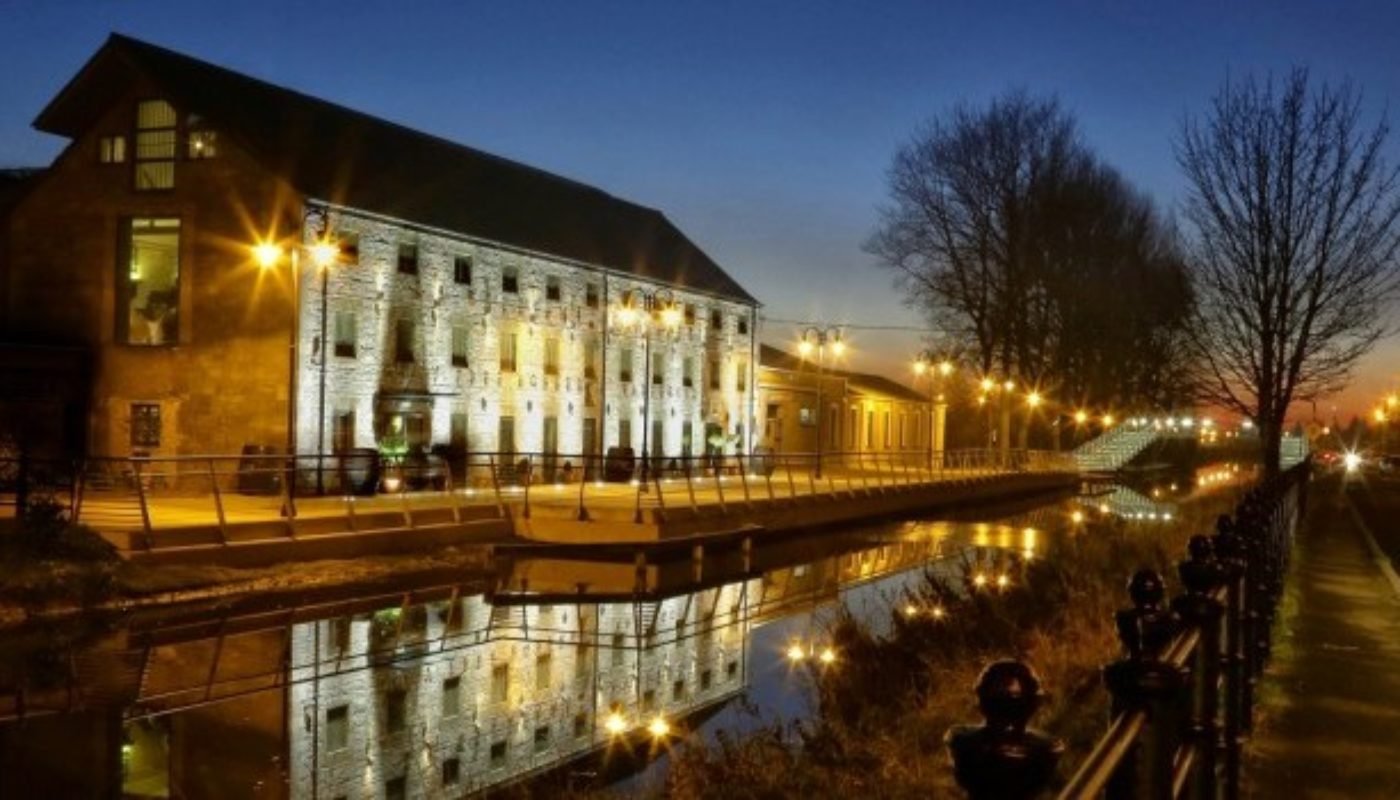 Home » Back to the Future with Tullamore D.E.W

Back to the Future with Tullamore D.E.W

Being a lover of whiskey, I am a member of the Irish Whiskey Society and I had a unique opportunity to pop out of Dublin with some fellow enthusiast’s down to  Tullamore ‘located deep in the heart of Ireland’ to visit the distillery visitors centre and we were privileged to get a chance peak at the new distillery which was built on a bog outside the town which in itself was a feat of brilliance. (ask an engineer why and beware the answer will be long)

So on a brisk Friday morning we all met up outside the visitors centre located in the town next to the Grand Canal. The visitors centre was the orginal bonded warehouse for the distillery which was set up in 1829 and now an interactive, educational and true place of interest. A lot of thought has gone into the refurbishment and design of the building making sure to keep the orginal exterior and as much of the interior sympathetically blended with some sleek and modern touches.

Our tour was lead by the knowledgeable and engaging Ita. We started with a five minute video giving a little history and background to Tullamore, after which the rounded screen parted and out from behind stepped Ita who took us into a mockup of a kiln which really kicked off a great tour though the well-organized design from grain to glass from images to actual tools used. Reading about how whiskey is made is on thing but this tour really brought the process to life in a way which was easy to grasp and by no means intimidating with a few chuckles along the way.

Our tour here ended with a taste of three of their whiskies in the beautiful tasting room. The whiskies chosen were to show the progression and the expression Tullamore D.E.W whiskey has (tasting notes below).

Little fact about the initials D.E.W of Tullamore D.E.W came from Daniel E. Williams who took over in 1887 who’s vision of whiskey was one of an ‘unrivalled smoothness and complexity’ so he put his initials on it.

As I did visit with the society we got the unique opportunity to visit the big and beautiful distillery ten minutes outside the town in a peaceful bog area. At the moment only staff, trainee’s, some press and brand ambassadors are able to enter but they have not eliminated the possibility for the general public to visit in the future.

I do hope they do because it really is a thing of beauty from exterior to interior but then after seeing the detail and thought that went into the visitors centre I should have expected but this building stood with authority and intrigue.

Upon arrival we were met by their Global Brand Ambassador John Quinn who took us in through the big wooden doors into a simple yet grand room with a large phoenix hanging in the center. The phoenix is said to be a symbol of the courage and strength shown by the town’s people after the town was destroyed in 1785 when a hot air-ballon accident resulted in a fire. The Phoenix is even on the town coat of arms and Tullamore D.E.W named a whiskey after it.

From here we ascended to a very large room which houses a bar for training & tasting, at the far end are two large tables used for meetings and dinning purposes, the highlight of the room is the lounge area which was designed with a touch of class as in the day distillers were well off and that reflected in their homes so here they took the inspiration and created a stylish & comfortable area though the piste the resistance had to be when John folded back the wooden door to reveal a large picture window into the distillery. One word wow, it was almost like a set from a James Bond movie.

We finished off the tour with a wee dram from John Quinn’s cask, which really is the only way to say farewell. Now I’m off to count the pennies and start saving for my own cask though will I be as generous as John who knows. Check here for more info on the Irish Whiskey Society. It really is a great way to taste rare, unique whiskies from all over the world and meet the people behind the brands whilst learning a little. No knowledge is required what so ever only a true interest.