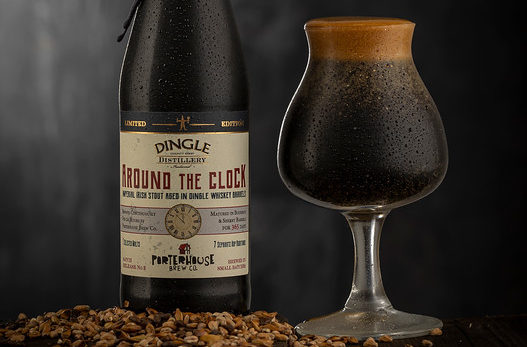 After the extremely successful, limited release of the first batch of Around the Clock last November, Porterhouse Brew Co. is back with Around the Clock 2 – the second generation of its award-winning Barrel Aged Imperial Stout.

Renowned pioneers of Craft Brewing in Ireland, Porterhouse Brew Co. strive to embrace and create increasing complexity in beer, focusing on exceptional flavours derived from pure, simple ingredients. These trademarks are evident in the launch of its unique new Barrel Aged Imperial Stout – Around the Clock 2.

Around the Clock 2 combines seven different malts complimented by seven separate hop additions which are boiled together continuously over the space of 24 hours, using a method only used in Ireland by Porterhouse Brew Co. This novel “Around the Clock” brewing creates an immense flavour profile with distinctive malt character.

Following the brewing, the stout undergoes maturation in freshly emptied Bourbon and Sherry casks from the Dingle Whiskey Distillery for 365 days – an additional 185 days to the first release. The longer maturation process creates an even fuller, smoother and more flavourful stout.

The first batch of Around the Clock, released in November 2020, won both the Independent Craft Brewers of Ireland (ICBI) Beer of the Year award & Beoir Beer of the Year. The limited release of the barrel aged stout sold out across the country within weeks and the limited release of Around the Clock 2 is expected to do the same.

Commenting on the launch of Around the Clock 2, Porterhouse Head Brewer, Peter Mosley said “With the huge success of the first release of Around the Clock the brewery team were very excited to see what the second batch would become. The additional 185 days the beer spent in the Bourbon & Sherry casks gave the liquid even more depth and flavour. Combined with our prior 24-hour brew boil, this beer has become even more balanced & smooth. Around the Clock 2 is 365 days in the making and we feel we have created an even more exceptional beer to the first batch, one that is unique and validates our continued desire to innovate and evolve in the Irish brewing industry.“

Around the Clock 2 has a rich, ebony colour with a viscus, velvety smooth texture. Unearth sweet red fruits, marzipan and toasted oak, complimented by a nose of sticky toffee, apricot jam and cacao. This warming, malty finish with a light bitterness is one for lovers of stout and whiskey alike.

Priced at RRP €5 per bottle and with an ABV of 12%, Around the Clock 2 is available at porterhousebrewco.ie and select off licenses from 11th March 2021.