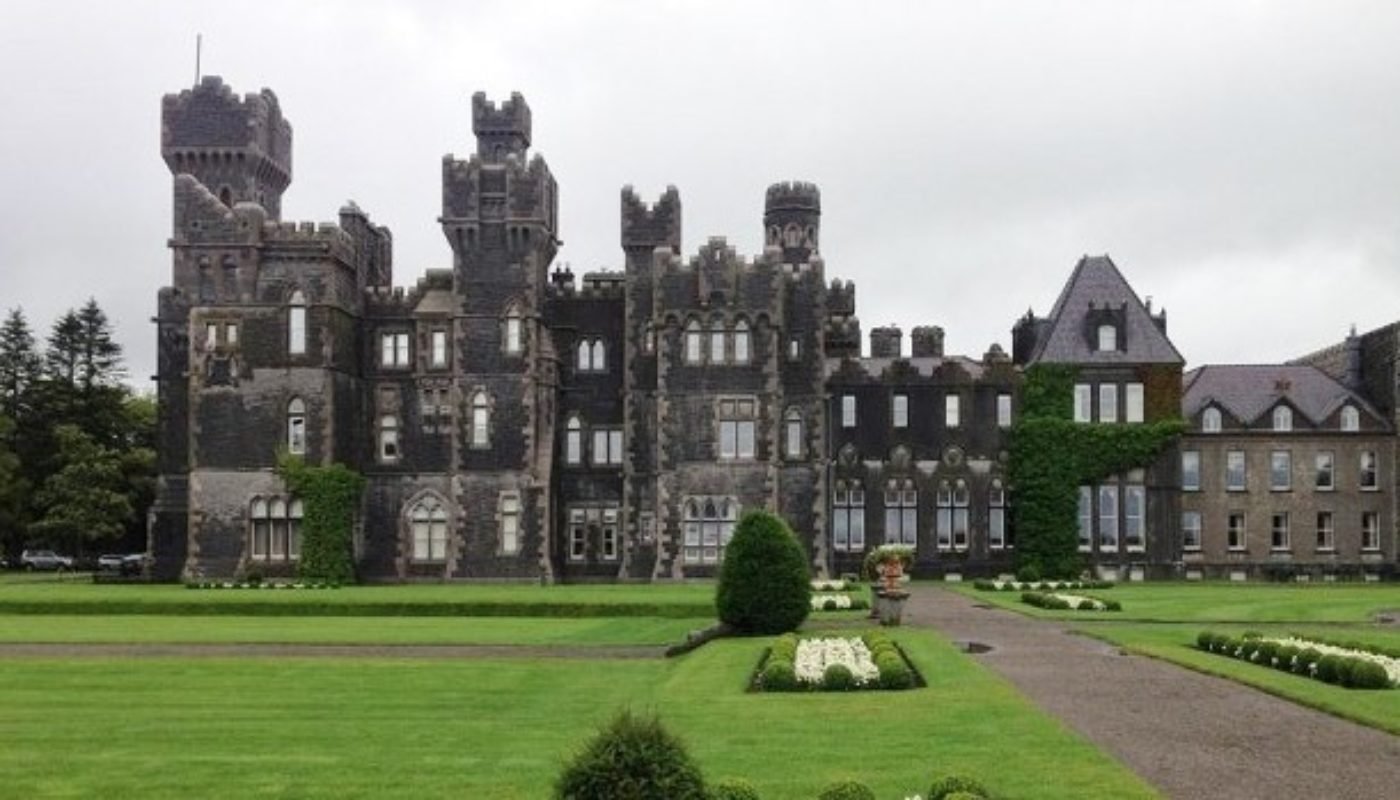 There are times when life can be hectic trying to keep on top of the many commitments and responsibilities that we all have. Every-so-often I think that it is important to pause, take time to relax and do something that is enjoyable and also a little self-indulgent. In my opinion, there is no better way of doing this than by taking afternoon tea.

Whilst there are many places which offer afternoon tea, I had heard great reports of the traditional afternoon tea served in Ashford Castle in Cong, County Mayo and I was eager to try it.

Ashford Castle, a luxury 5 star hotel owned by the Red Carnation Hotel Group, was founded by the Anglo-Norman de Burgo family in 1228 and later, during the 19th and 20th centuries was home to the Guinness family until it was purchased by Noel Huggard in 1939 and turned into a world-class hotel.

As you drive past the grand entrance, through the estate grounds and over the bridge to the Castle, the beauty of the landscape and the magnificence of the historic castle buildings literally take your breath away. It is not difficult to see why the director John Huston chose Cong as the location for his famous film The Quiet Man which starred John Wayne and Maureen O’Hara and why so many of the actors chose to stay in Ashford Castle during filming. The Castle and its grounds are absolutely spectacular and when you arrive you know that you are somewhere different; somewhere special.

Afternoon tea is primarily served in the elegant surroundings of the Connaught Room where, during the 1860s, Lord and Lady Ardilaun would often sit down to discuss matters related to the running of the Estate and to plan future work. Together they would drink tea and dine on sandwiches and cake. This custom has been revived and Lord & Lady Ardilaun’s Traditional Afternoon Tea is available daily in Ashford Castle between 1.30pm and 4.00pm.

Shortly after arriving I was shown into the Connaught Room and guided to my table beside a window overlooking the castle’s beautiful gardens and the scenic shores of Lake Corrib. If you wish you can have a glass of Champagne with your afternoon tea and I decided that I would treat myself while I examined the menu in greater detail.

The afternoon tea menu is enticing offering an impressive selection of teas. Familiar choices including an Irish Breakfast blend and Earl Grey appear alongside Smoked China, Irish Afternoon Gold and the provocatively entitled Light & Late tea. Also available are a selection of Oolong, various Green Teas and Infusions. In the end I chose a lovely Irish Whiskey-Cream Assam, which, with its malty tones and whiskey aroma added to my sense of well-being.

You can decide to have your beverage of choice at any stage during the meal and refills aplenty are available. I requested my tea immediately and let it draw while I sipped my champagne and surveyed the wonderful selection of sandwiches which had just arrived on a tiered cake-stand along with two plates of the most fabulous bite-sized cakes and pastries.

All too often, I find that the quality of the sandwiches lets many an otherwise wonderful afternoon tea experience down. I understand that due to the demands and pressures of busy restaurant and hotel kitchens it is inevitable that sandwiches have to be made in advance but this means that they are often served over-chilled having been removed from the refrigerator only shortly before serving. This tends to dull the flavours, dry out the bread and leave you feeling disappointed after eating them.

If I rave about the sandwiches served in Ashford Castle, it is because I cannot remember ever having eaten any that were as good, as part of an afternoon tea. They satisfied on every level, from the freshness of the bread to the inventiveness of the fillings and their attractive appearance. Old favourites sat beside quirky new offerings and whilst all the sandwiches were noteworthy I particularly liked the Connemara Smoked Organic Salmon with Cream Cheese. The cream cheese was enhanced by the unusual addition of some lime jam which tasted delicious against the richness of the smoked salmon and the thinly sliced wholemeal bread. A Roast Chicken, Mayonnaise and Almond sandwich was packed with generous chunks of succulent chicken meat bound in mayonnaise between slices of cloud-soft white bread. These were presented as roundels with their edges encrusted with toasted flaked almonds. I absolutely loved them. Other sandwiches included Egg & Broccoli Cress and Cucumber with Crème Fraîche & Rock Chives and were equally delicious.

In Executive Head Pastry Chef Paula Stakelum, Ashford Castle has an absolute gem. She is responsible for and oversees the creation of all the fantastic treats that make up the afternoon tea. Her brilliance is particularly on show with the cakes and pastries that are served. It is difficult to do them justice with mere words as each had qualities that made me sigh with pleasure. I thought the Apple Bakewell & Connemara Whiskey Custard was superb and loved the smoked almond it was topped with. The Vanilla Cheesecake with Coffee Meringue Lollipop was one of the lightest and creamiest cheesecakes that I have ever eaten while the Dark Chocolate Torte with Chocolate Crémeux was sinfully good. I could go on and on but suffice to say everything was outstanding.

Edible flowers, picked from the Estate gardens decorate the exclusively designed and very pretty antique Wedgwood plates on which the food is presented and they also adorn many of the cakes and pastries, giving everything a fresh and almost homely feeling.

Like everything else, the warm scones that were served were a pleasure to eat. Plain, Fruit and Cheese Scones were accompanied by small bowls of Clotted Cream, Strawberry Jam and zingy Lemon Curd. I was encouraged by my very attentive and friendly waiter to try the Cheese Scones together with the Lemon Curd and can confirm that this seemingly peculiar pairing really worked with both complementing the other perfectly!

At €34 per person (or €49 with Champagne option) Lord & Lady Ardilaun’s Traditional Afternoon Tea may initially seem a little pricey, but I can honestly say that for the pleasure I derived from the whole experience and the exceptional quality of food on offer, it was worth every penny. An Afternoon Tea for Junior Guests is also available.

This is not your ordinary afternoon tea and Ashford Castle is no ordinary place. For a few hours on a showery Saturday afternoon I had the chance to relax, spoil myself and sample some absolutely delightful food, presented with love and care in an exquisite location. I felt as if my very soul had been pampered and I can’t wait to revisit.