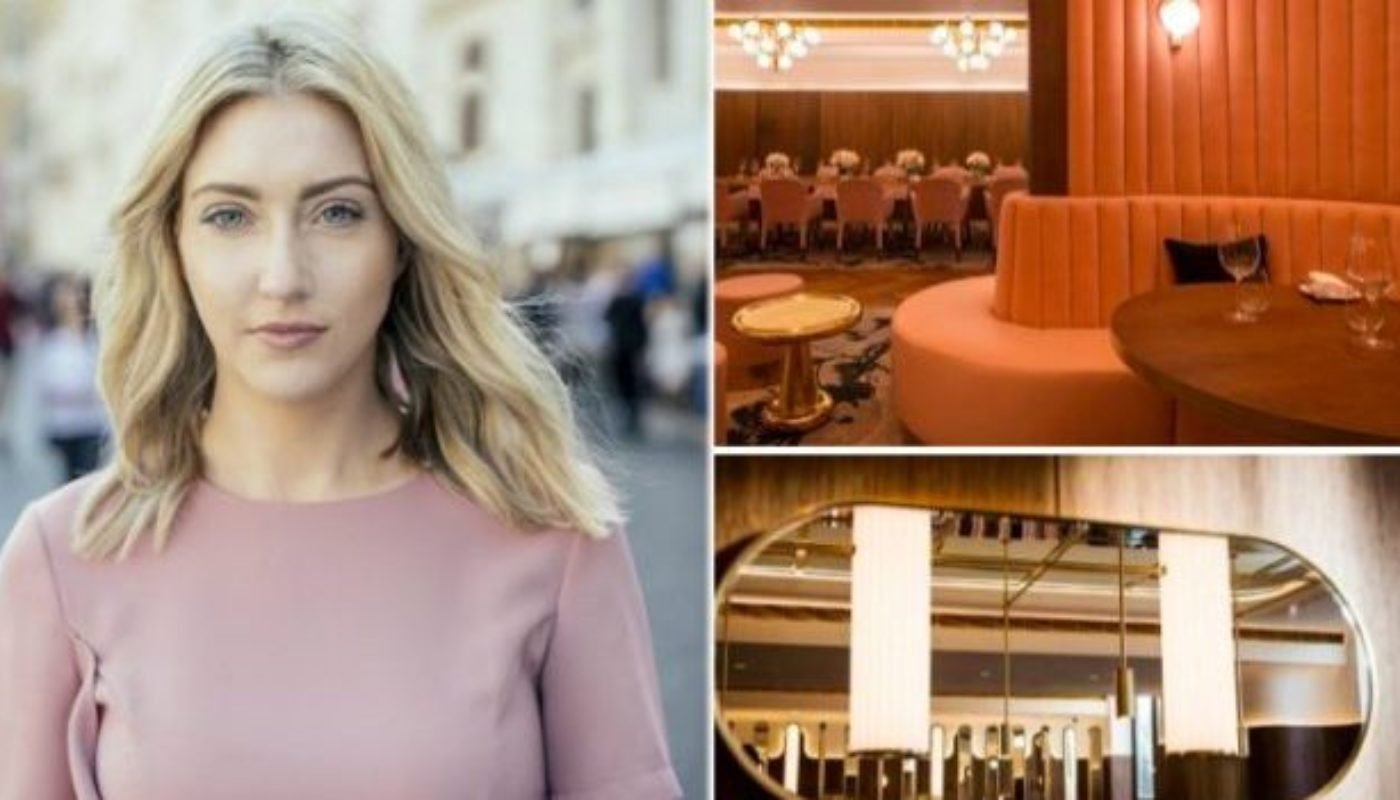 Aoife Noonan has the kind of career that some dream of. She makes desserts for a living(!) for a start, which just has to be fun. Plus the portfolio of restaurants she has worked with is very impressive… pastry chef for Ireland’s two Michelin star Restaurant Patrick Guilbaud and more recently working for the John Farrell restaurant group as executive pastry chef, which includes Luna, Dillinger’s, The Butcher Grill and 777.

Now she has taken the position of executive pastry chef in the most-talked-about restaurant opening in Dublin recently, Glovers Alley, in the five-star Fitzwilliam Hotel. The restaurant is the former home of the legendary Thornton’s Restaurant. “Andy [McFadden] first approached me last October and asked me for my input because he was setting up his kitchen from scratch and wanted to know how to build the pastry section”, Aoife explained.

“He was trying to get a team together at the time. As he had been based in London for years and I guess didn’t know a lot of pastry chefs here, he asked me if I could help him.

“I knew of him, we obviously work in the same industry and therefore have similar circles of colleagues and friends and we follow each other on social media. Also I had heard of him in Guilbaud’s as he did a stage there a long time ago.”

She added: “I obviously knew of his restaurant in London and that it was Michelin starred and I assumed he’d be going for that standard again with the new restaurant.”

“I didn’t really think from the start that I was going to come onboard; I wasn’t actively looking for a new job. I worked with him more on a consultancy role initially, speaking to him about what he needed to have for a class pastry section.”

“The more I spoke to Andy, the more I thought, ‘this is actually really exciting!’ I met him in the restaurant in the beginning and when I saw the room being built, it was very cool.” “He designed a completely new pastry section, away from the kitchen, and he asked me what I thought of it and what goes where in it, so I have been there from the beginning during the build and design of it.”

“As time went on I felt like I was becoming a part of it, even though initially I wasn’t; I was in it before I actually was, if you know what I mean? That’s what made me want to change in the end. It was an exciting new role.”

“Obviously having worked in Guilbaud’s before, I am used to those hours; that standard of Michelin food was really hard work and very disciplined. In Luna and the other restaurants in the John Farrell group, it was a completely different role, it was more managerial and my role was to develop dishes for all the restaurants, which was such a different style for me.”

“I had gone from Guilbaud’s to that, which was a big change, and now I was talking to Andy about those standards again and initially I did have to think if I was sure that I wanted to throw myself back into that,” Aoife commented.

“In my last role I was limited in what I could do and I don’t mean that in a negative sense. In Luna, we did push it a bit more, but it was using skills in a different way. When you get to Michelin standard, you can be so creative and take the time to be very detailed. It makes everything playful and inspiring. Using those skills to make everything intricate and beautiful. The sky is the limit at Michelin standard, you can push those boundaries more and really go for it.”

There is something so exciting about being part of Glovers Alley. Andy is such a passionate chef and has big plans for it. Chatting to him about what we could do and the potential… as it is so new we had to explore completely new ideas and avenues. Everyone is buzzing and looking forward to getting going.

Part of the fun of starting in a new rebuild like Glovers Alley is creating the kitchen. Aoife was given almost carte blanche for her pastry section, which meant designing it from scratch. “There’s been no holding back really on the kitchen. Not that it’s very elaborate, but it was a list of things we needed and it is a brand new kitchen. Everything is an investment, we want to get the best and have the best from the very beginning. I suppose it is our dream pastry kitchen and has allowed us to be very creative. I am working with pastry chef, Tara Gartlan, we will be getting a commis chef eventually, but for now it is the two of us.”

“Andy and I discussed a lot what we were going to do for the dessert menu and we’ve bounced ideas back and forth loads. A few of the dishes on the menu will be his signature dishes, which is great because it means that I am learning something new. We’ll have a pre-dessert, dessert and petit fours. We’ll be making all our own chocolate and bread.”

“For the desserts, we want to use the best ingredients. We’ll be using fruits that are in season, so for example when we open we’ll be using the forced rhubarb, which is a beautiful pink colour, and blood oranges. We’ll be incorporating lots of citrus actually and there are also lots of chocolate desserts that we’re playing around with.” Creating a menu for a new restaurant is intimidating, but Aoife thrives on the creativity and takes inspiration from many sources. “I get inspired from a mix of a lot of things. Obviously you are influenced from where you’ve worked before and what you’ve learned through that work, but also eating out and travelling – different cuisines and cultures.”

“Taking flavours that you know work well together, but maybe putting a contemporary twist on it. I always try and take a flavour I want to use, for example a specific chocolate I like, and I’ll think about what would go well with it – what kind of chocolate is it (dark/milk), what notes are in the chocolate, etc – and I’ll build a dish around that and try to add something to it that might not be expected.”

“You could, for example, infuse a custard with a certain type of pepper, a spice or a herb, that marries well as it is subtle enough and works well with the dish. Also different chefs are very inspirational to me. I love French cuisine too, there’s just something about it. For me, I have this thing about France, I just love it and the traditional French patisserie and the techniques are very highly regarded in my book.”

For the past year, Aoife has collaborated on various projects and given demos at food festivals like Taste of Dublin, however with Glovers Alley opening its doors priorities will shift for the moment. “Glovers Alley is my number one priority right now, getting everything in motion and making sure it is perfect. However, I am definitely going to continue to pursue other avenues like magazine work or demos at events and on TV.

“I’ve agreed that with Andy, that in the future once we are set up, that I have the flexibility to do that. Before,when I worked in Guilbaud’s, it was very hard and when I was approached to do some other work, I had to turn it down. Working in Luna allowed me to explore that as they gave me the flexibility and support to do so and over the last year or so I really enjoyed it. I do enjoy collaborating. But, first things first!”