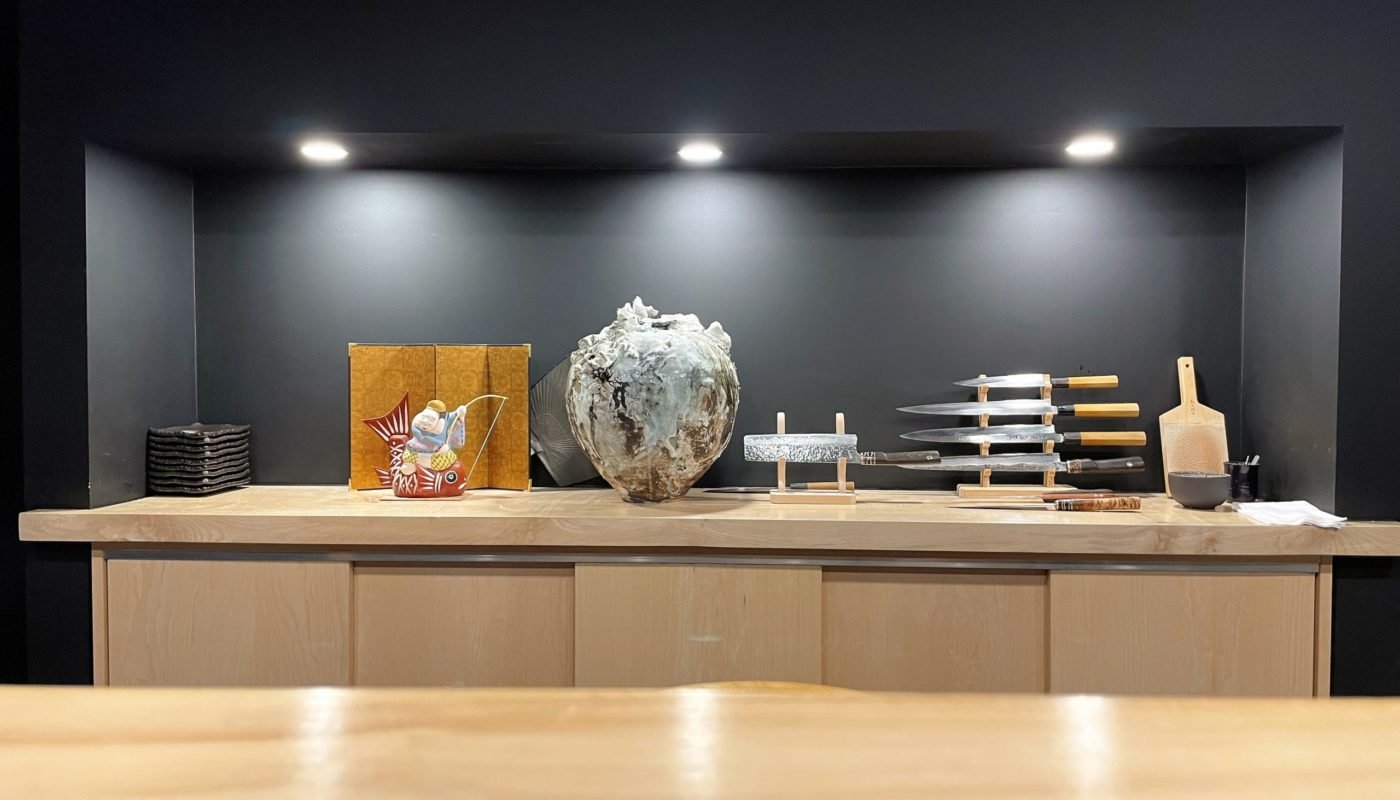 There are 12 courses on the winter menu for Ichigo Ichie Cork with 23 distinctly different dishes.

Ichigo Ichie, located on Sheare’s Street, Cork city, is a Japanese fine dining experience restaurant serving a Kaiseki menu. Kaiseki is akin to a tasting menu, but ingredients and menu are hyper seasonal (changing every four to six weeks), and dishes follow a prescribed sequence and flow. There is formality and respect and reserve; everything is meticulous in detail; nothing is superfluous without reason, and there is a very strong sense of the ethereal.

When chef-proprietor Takashi Miyazaki designs a menu, he imagines it, paints each dish in ink and watercolour, then breathes them to life. His creations exist first as art; this could be the most pretentious meal you’ve ever had, but it isn’t – it really isn’t.

Takashi Miyazaki opened Ichigo Ichie in 2018, his first Michelin-star followed six months later. No-one who dined in those intervening months at the zen-like temple of Japanese-Celtic food was surprised. This is a style of food – an opulence of cuisine – that Ireland had never experienced before, and I doubt very much that anyone has come even close since.

I’ll admit, this is not my first time here – it is my fifth, and I’m not ashamed to admit it either. I don’t keep booking in for the kudos of saying where I’m having my dinner tonight, and despite evidence to the contrary I definitely am not here for the ‘Gram. I am here – again – because I adore the food, because it doesn’t exist anywhere else outside of its little corner of Cork, and because who knows when a visit to Japan will become a reality. Ichigo Ichie is an experience like no other, and it is an education. In Takashi’s hands, one ancient culture melds with another: here is a Sea Cucumber from Connemara paired with pickled Irish grown daikon radish, ginger, and a broth of exquisite Japanese green tea and dashi vinegar.

Harty’s oyster, cod milt, daikon, and yuzu. Cod milt? I ask Takashi. “Yes, it’s the sperm sack of the cod fish,” he says bluntly. I’m pretty sure he’s not trying to shock me, but I can’t help but blurt back, “sperm sack and oysters? Are you sure this shouldn’t be on the Valentine’s menu?” But not at all: the oyster, as clean as a sharp saltwater whistle, puts the edge on a perfect cube of pure white mousse intense with flavour of cod. Fresh yuzu and a peppery crunch of daikon completes a look of austere purity that belies the kind of perfect flavours that exert illicit sounding noises from diners.

I’m able to talk this casually to Takashi because Ichigo Ichie is also Ireland’s only kappou-style restaurant. Kappou-style is where the chef is visible to his diners from behind a counter and can easily interact, and where we are this evening. The restaurant has three distinct seating areas: Miyabi, seated at the kappou counter; Nagomi, in the room in which kappou is located; Sekitei, located in the Stone Garden area furthest away from kappou and closest to the entrance. Pricing increases the closer you are to the chef, from €120pp to €135pp. The menu is the same no matter where you sit, but if you can stretch to the extra few Euro, I highly recommend booking into Miyabi if you want maximum interaction with the chef, ingredients, and dishes. Every table gets a personal visit from Takashi during the meal, and the front of house staff, personable and knowledgeable, are on hand to explain each dish and ready to recommend what to drink with each.

There is a fine selection of natural and organic wines and whiskeys, but I say while in Rome… There is a wonderful selection of Sakés; ask you server for what they recommend with different courses and order by the glass, carafe, or bottle. We opted for a carafe of Kozaemon Tokubetsu, Junmai Miyama (15.5%) for the first half of the menu, and for the second half a carafe of Hakkaisan Yukimoro, Junmai Ginjo (17%) aged for 3 years in mountain cellars encased in snow. The former was light and intensely fruity, the latter more rounded, fuller-bodied, a mature sake perfect for heftier flavours.

As you watch Takashi move, there is an air of studied practice. The way he works his samurai-like blades ribboning and slicing with precision, swaying rhythmic movements while shaping rice: he is consummately familiar with his art. There is much I do not know or understand about the cuisine of Japan, but I do know what each exquisite plate of food does to me. I can see artistry: I stare so long at the arrangement of Sashimi because I don’t want to ruinate what is in front of me. Sashimi, simply states the menu. What comes out is this:

The monochrome majesty of butter-like swordfish sitting on top meaty pork belly, cauliflower, a slick of squid ink and charred padrón pepper bridges delicate flavours of sashimi with umami seductiveness of Rosscarbery Hereford ribeye, sweet and bitter roasted miso cabbage, and Irish winter truffle – waves of comforting umami rolling one after the other. There is no choice but to surrender and slip under the surface.

There is a gradual rising of intensity with each course, a bracing crescendo before a gentle rebalancing with rice, dashi, and broth. Wasabi ice cream and roasted soybeans are somehow wrestled into dessert mode before I relent entirely and reach for the coffee. This is journey’s end; time to alight. Several days after my (fifth) once in a lifetime experience, and I am still lost in thought of each course. How will I find words to explain what I have eaten? It’s like trying to describe Monet’s Water Lilies using emojis.

Promise yourself you will visit Ichigo Ichie Cork for a once in a lifetime dining experience; no guarantees it will remain as just the once – Takashi Miyazaki is having too much fun creating the most exciting and uplifting food in Ireland today.