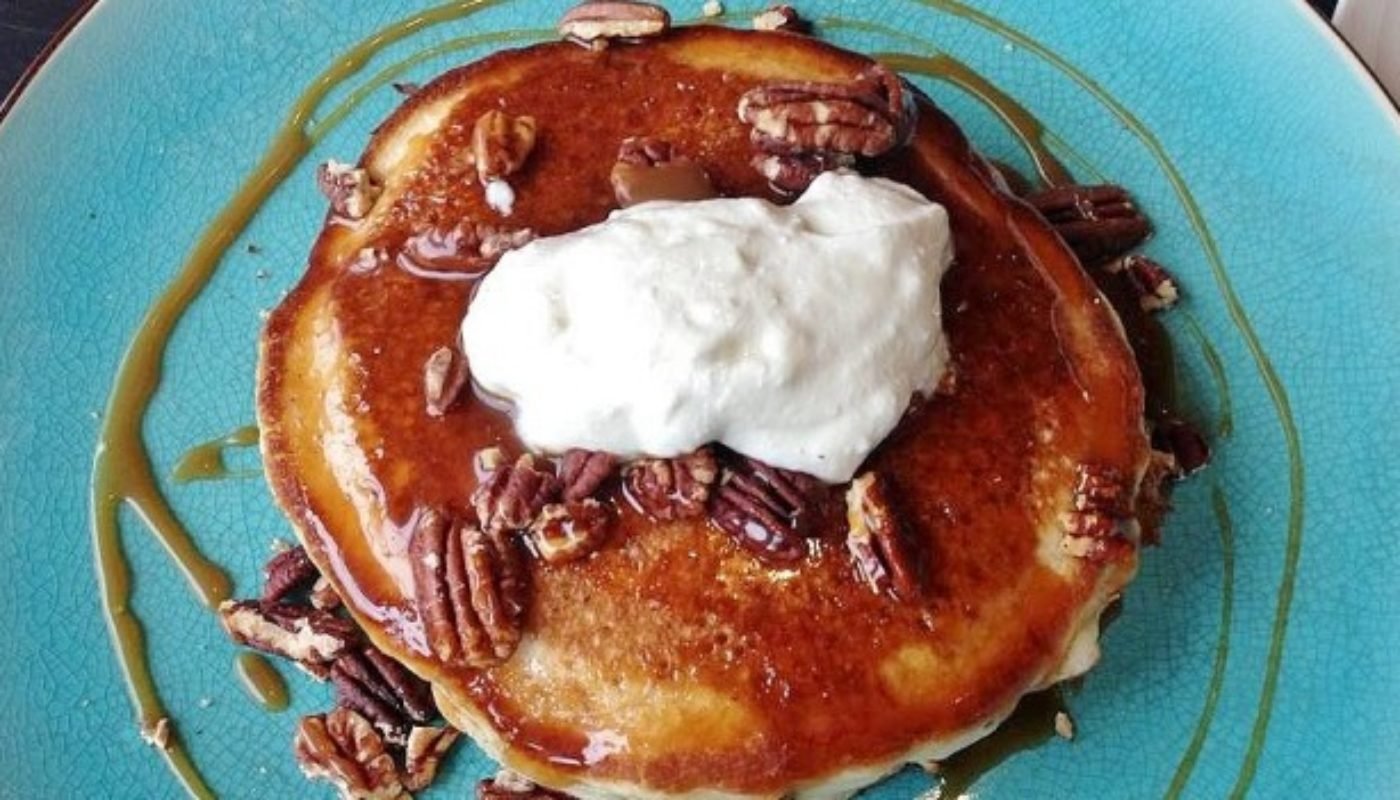 An Angelic Brunch at Angelina’s – Review

The growing popularity of brunch as a meal means that there appears to be no end to the amount of places cropping up that are offering it. The truth is that many people like to go out for late breakfasts at the weekend and are more than happy to let the meal roll languorously into the afternoon. It definitely beats having a piece of dry toast or a bowl of soggy cereal at home and makes the weekend seem that little bit more indulgent. Throw in a few cocktails (mandatory in my opinion) and you are on to an absolute winner.

Latest recruit to the Dublin Brunch Bunch is the newly opened Angelina’s, located off Baggot Street beside the Grand Canal. Sister restaurant to Sophie’s at The Dean Hotel, Angelina’s is spacious with a relaxed atmosphere, comfortable seating and a stunning bar. It is decorated in warm, muted tones which prevent the large space from appearing cavernous. The restaurant also has an outside balcony area overlooking the canal and I expect that during the summer this will be one of Dublin’s most popular dining spots; a place to enjoy good food and have a few drinks on warm evenings.

Although recently opened, the restaurant has already hit the ground running and I have heard great reports about the food on offer under Head Chef Ryan Bell. A quick online search brings up the restaurant’s menus and I am delighted to see that in addition to serving dinner seven nights a week and lunch on weekdays, Angelina’s also offers a weekend brunch on Saturdays and Sundays from 10.30am to 4pm. I can never understand why so many venues who offer brunch around the city only start serving at midday as this has always seemed a little late to me. In my opinion, the earlier opening is another plus in Angelina’s favour and I immediately book a table for an 11am Sunday brunch.

Accompanying me was my eldest daughter Aoife – a self-professed brunch connoisseur and buttermilk pancake devotee – someone who is quite prepared to leave something on the plate if it fails to come up to her exacting standards… in other words; a tough customer! As we arrived we were greeted warmly by the front-of-house staff and shown to our table beside a large floor-to-ceiling window looking out onto the canal. Judging by the number of tables already occupied, the 10.30am opening appears to be popular with diners and the restaurant already had a lively feel.

The brunch menu is divided into different sections and includes Cocktails, Healthy, Benedict, Toasts & Pancakes, Eggs and The Rest. To kick off proceedings, we both ordered drinks – an Orange Juice (€3.95) for Aoife and a cocktail for me. Angelina’s offers a number of specific brunch cocktails but diners can also order from the main cocktail menu if they wish. Despite the fact that I am normally a fan of Bloody Marys when having brunch, I decided to order the provocatively named Best Damn Sazerac in Ireland! TM (€11). This is a boozy cocktail sometimes made with Cognac but made here with Rye Whiskey to which a sugar cube soaked in bitters is added. Finished with a spray of absinthe and garnished with a twist of lemon peel just before serving, this isn’t a drink for timid types. I loved it.

Feeling in the need of something a little healthy but comforting at the same time, I decided to order a bowl of Healthy Porridge (€5.50). Made with almond milk, grated pear and golden raisins, this was one of the best bowls of porridge I have ever eaten, possessing a natural sweetness that was perfectly pitched. Gently flavoured with cinnamon and served with a choice of jam on the side, it was delicious.

Aoife decided to keep it simple and ordered a side serving of Toast (€1.95) to start. Toast is one of those things that we all take for granted and as a result, it is not something that tends to excite but here the thick slices of toasted brioche that we were presented with were wonderful and worthy of specific mention. Crisp on the outside but soft and still slightly fluffy on the inside, the toast was incredibly satisfying to eat. Served with Glenilen Farm butter and extremely tasty homemade preserves, I was reminded how often the simple things in life can be the most delicious.

I love poached eggs and for me nothing beats the slightly hedonistic quality of Eggs Benedict – poached eggs served with sliced ham on a toasted muffin with rich hollandaise sauce. Angelina’s offers a number of variations on the eggs benedict theme and although tempted by the Crab Cake version, I decided to go for the Eggs Florentine (€10.95). Served with spinach, a grilled Portobello mushroom (instead of the burnt asparagus which had been listed on the menu) with Sweet Potato Fries on the side, this was a substantial dish where every element had been perfectly seasoned and cooked to perfection.

The Stacked Vanilla Buttermilk Pancakes with Salted Maple Caramel & Roasted Pecans (€8.95) succeeded in eliciting a spontaneous ‘wow’ from Aoife when they were placed in front of her. A beautifully presented dish with a generous amount of caramel and pecans, this was food that was destined to please. After enjoying a few mouthfuls, she declared them to be the best she had ever eaten… which is really saying something! The small sample I was able to sneak confirmed that they were indeed rather good.

In keeping with its general ambiance, service in Angelina’s was warm and friendly and added to our enjoyment of the meal. I was a bit worried about venturing in so soon after it had opened as some restaurants need a little time to get bedded in. Not here. The food spoke for itself. Everything we ate was delicious and it is somewhere that I will definitely visit again soon.

For me, food and cooking is about family, friendship, sharing and conviviality. As a mother of three, I want my children to grow up with a love and appreciation of how lucky we are to live in a country like Ireland with such great produce and so many wonderful food producers. I continue to write and share my enthusiasm for food on my food and recipe blog The Game Bird Food Chronicles.