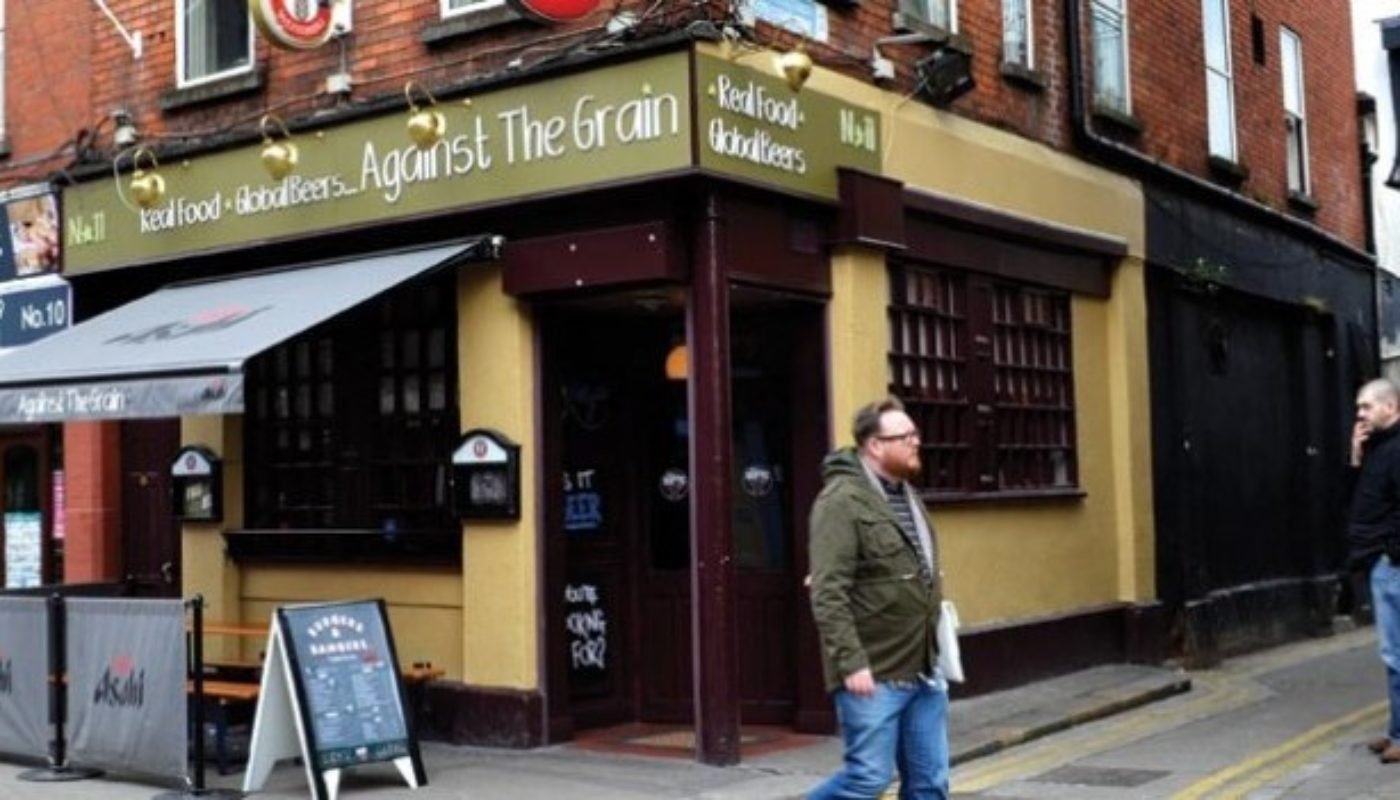 Part of the ever expanding Galway Bay Brewery chain, Against The Grain can be found on Wexford St., on the opposite side of the street to Whelan’s (where Carnival bar once stood, for those of us old enough to remember).

For many years the Grain stood here alone as the only true craft beer bar to be found anywhere along the Camden mile. In an era of chrome fittings and neon under-lit counter tops, this is a bar that truly lived up to its name as it challenged the status quo of what a bar should be. It is a testament to itself that all these years later, with the craft revolution in full swing, this simple bar has remained unchanged and unfaltering from what it has always set out to be.

There is a fantastic range of beers on offer here (and across all of the Galway Bay bars) with their own beers leading the charge across the taps. For those who are new to the range, the award winning Of Foam & Fury is a must try for any ale drinkers, while Two Hundred Fathoms should be the first port of call for those out for a stout. If either of these two brews, or any of the Galway Bay range tickles your fancy, you always have the option of taking a growler away with you to enjoy the deliciousness of draught craft at home.

There are plenty more exotic beers from further shores pouring here too. With a large amount of rotating taps and a detailed chalkboard menu hanging above the bar, the friendly staff here are always happy to offer up suggestions and tasters if the multitude of options begins to overwhelm.

Having been pleased with everything I’ve eaten in here over the years, in particular the calamari, I was excited to see what was on offer from the new menu that was launched recently. Burgers and sandwiches make up most of the options here, but there are a number of interesting additions such as a very hearty chicken, chorizo and butterbean stew.

However, stews and sambos aside, there is one culprit on the new menu that instantly grabbed my attention: The Elvis Burger. Standing three buns and two burgers tall, this behemoth of a feed is a must try for any burger aficionado. Three bites in and any hope you had of remaining dignified will crumble as quickly as the bun as you reach for the cutlery and another napkin. A true beast of a burger!

The one downside here is the layout. When crossing the threshold on any busy night, it can be easy to be turned off by the sight of the crowded bar, as punters shout orders of obscurely named beers from two or three rows deep. But for those who are stalwart enough to brave the crowd, you can usually find respite towards the back of the room and furthermore upstairs – where there is also a pool table to be found in quieter moments.

All in all, Against The Grain is a no-nonsense craft beer pub with great staff and an ever better atmosphere. Let it hold its reign over the Camden mile for many more years to come.