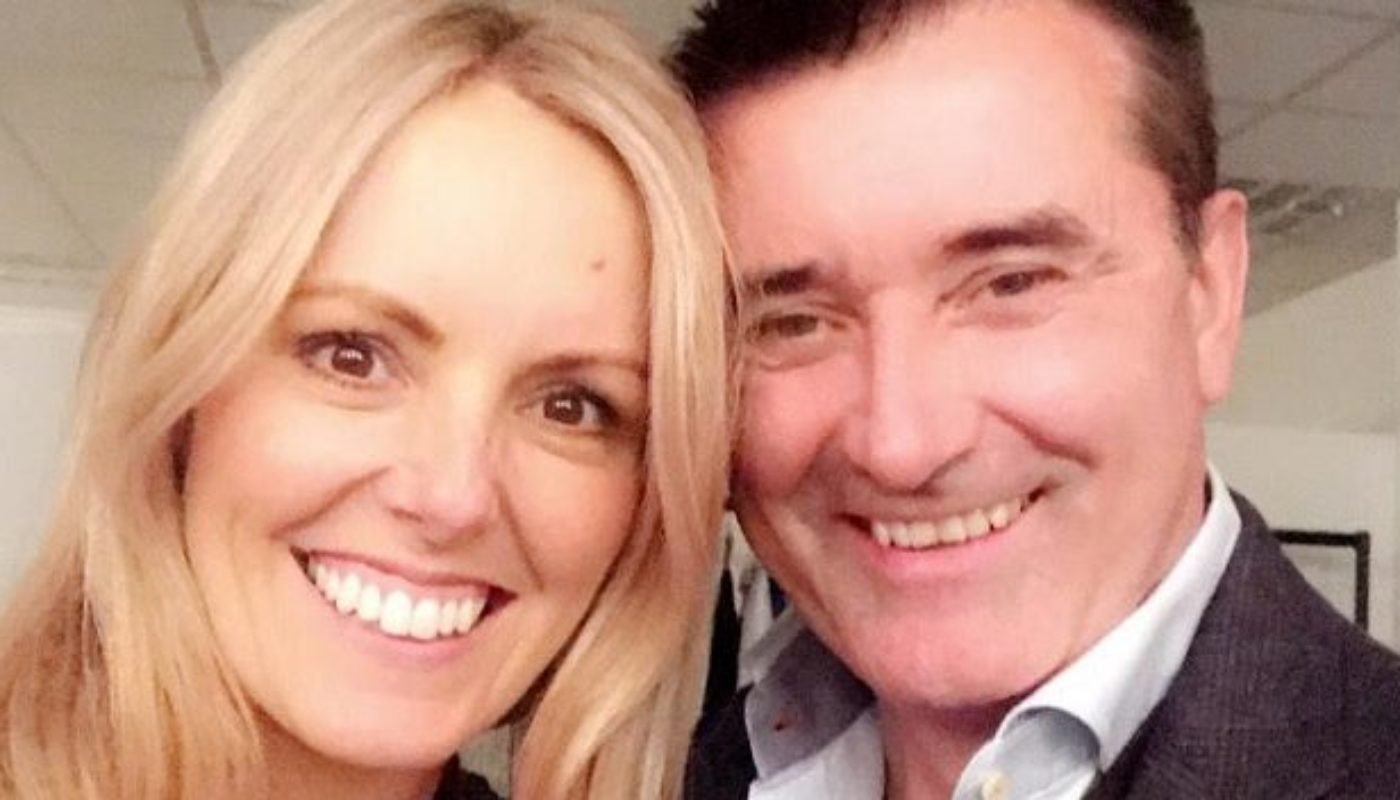 Home » A Taste of Life With…Martin King and Jenny McCarthy

A Taste of Life With…Martin King and Jenny McCarthy

Even on a rainy day, Ireland’s favourite weatherman can be guaranteed to bring a smile to the faces of the people of this often wet and dreary little Isle, but what brightens Martin King up on those dull days? Apart from his effervescent wife, photographer to the stars Jenny McCarthy, the proud Dub turns to the ultimate love/hate food – Coddle.

So enamored with the traditional white stew of boiled sausage, bacon and vegetables is he, that he proudly counts being a judge at a competition called Dublin’s Next Top Coddle as one of his favourite food moments. “They had everything from the original made with water to people using soup and then bacon medallions instead of rashers, very posh but blasphemy!” he laughs.

Jenny however doesn’t share her husband’s passion for the comforting dish, but admits “I could probably eat it without the sausages, or even if you browned them” before an animated Martin jumps in “NO! That’s a mortal sin, if you brown the sausages it is not a coddle!” he insists. Just one step shy of having a peek into their fridge, in the south Dublin Photos by Jenny studio I sit down with the busy pair to get a glimpse into their lives through the lens of food.

While balancing lavish weddings abroad with the trials and tribulations of having five children sounds like a recipe for disaster food-wise, Jenny still finds time to cook. “I don’t know if I’m a very good cook, but he eats my food anyway!” she laughs. Throughout our chat it would become clear that Jenny is no kitchen novice, with plenty of tempting dishes up her sleeve and the tendency to even whip up a batch of freshly baked scones in the mornings, like the Wonder Woman to Martin’s weather man.

“Of late I have to be much more organised, since Martin started on Q102 I’m like a single mother!” she jokes, but it seems Martin likes to spend a bit of time in the kitchen at home as well as on TV3’s Six O’Clock Show. “I do like cooking but if Jenny comes up with a dish or discovers a recipe she’ll cook it and I’ll go right, I’ll copy that to the letter – I’m a very mechanical cook.” When it comes to choosing between healthy or hearty dishes to cook, the pair agree completely that food has to be comforting above all else. Jenny immediately jumps in with hearty, and although Martin says they do try to be healthy, “sometimes your hand slips when you’re using cream!”

There is one ingredient Jenny won’t be experimenting with – the often villified coriander. “It tastes like perfume, if someone is too heavy handed with coriander I physically can’t eat the dish,” she says, and with this coriander crisis in mind it’s a good thing that Martin’s number one food hate is Indian cuisine (a bad experience many years ago) which means the takeaway of choice for the couple tends to be Thai or Chinese. “Friday night is takeaway night, because its my night off”, says Jenny, “so we tend to stay in.” Both agree that they have found their go-to Chinese eatery, Hong Kong Kitchen in Churchtown. “They do the nicest chicken curry I’ve ever tasted from a Chinese” Jenny confirms, while Martin is enamoured with their beef dishes. “When you ask for fillet beef, you’re getting fillet beef…It’s stunning!”For their Thai fix it will be Siam Thai in Dundrum, “and Martin orders the Massaman Chicken Curry every time, without fail!”

“Can I be honest?” Jenny asks, wincing slightly. “Martin would be a very safe eater” “It’s down to the bad experience with the Indian!” he explains, before Jenny, doubting this excuse, adds that he doesn’t eat fruit either. “You love your mashed potato and your veg and your meat!” Jenny says, with Martin arguing his corner for a more adventurous palate.

I had to ask, as an interested party, if that is why Martin is rarely seen wolfing into the meals myself and my fellow Six O’Clock Show cooks manage to serve up in the face of the banter and laughs we have with him in the Six Kitchen. “Within 30 minutes I’m going to be sitting down to dinner!” he argues to get me off his back.

Martin and Jenny are big believers in dedicating one night a week out of their hectic schedules to keeping the romance alive with a date night dinner out. “We always enjoy our nights in The Trocadero, the atmosphere is just amazing and it is always so fun. The same can be said for Fire, with Richie and the team, it’s always a good night.”

But what of their very first meal together? “It was an Italian in Celbridge somewhere, I can guarantee you it wasn’t something messy like spaghetti because I was mortified!” Jenny tells me. Martin laughs heartily as he quizzes us about first dinner date rules like “nothing with sauce and nothing that can hit the side of your face!” “Is that why they always go oh I’ll just have a starter for my main course?!” he asks. “Well I don’t do that anymore love!” Jenny answers as all three of us fall about laughing.

For special date nights such as birthdays, the pair go all out to mark the occasion with amazing food. “If we really wanted to treat ourselves, it would be Shanahan’s. That would be a serious treat,” Jenny says as Martin harks back to their last great meal there. “They do an amazing rib-eye and we both go for medium well. I like a rib-eye because of the bone staying in, the fat, the marbling – delicious!” Clearly a romantic, for Jenny’s birthday it will often be a foodie trip to London, with Richard Corrigan’s Bentley’s one year, followed by what they describe as their most memorable meal together at Gordon Ramsay’s Claridge’s. “It was all a surprise on Martin’s part, with a hair appointment booked and all!” she smiles.

With a shared love of rich, comforting food and keeping sacred the weekend date night, it comes as no surprise that one of Martin and Jenny’s go-to date spots for their Saturday night dinner is a cosy and authentic little Italian gem on Balfe Street, Little Caesar’s Palace.

One thing makes this eatery stand out for the couple – “it’s all about the atmosphere. When we go in on Saturday nights its loads of regulars, couples on their Saturday night date. The atmosphere is always electric.” “We get the menu and we know not to order starters because they give us this bread, Foccacio, its very thin with large shavings of Parmesan and tomato – oh my God, I’d get up in the middle of the night for it!” Jenny tells me.
Sticking with the hearty theme, Jenny has a couple of firm favourites but keeps an open mind – “I love their pasta dishes like traditional Spaghetti Bolognese, but often I say I have no idea what to get and they’ll make me up something not on the menu, they’re delighted to go off script.”

Little Caesar’s has been Jenny’s favourite haunt for 25 years – “I introduced Martin to it and that’s where Martin met Sambuca!” she laughs. The divisive aniseed liquor is in fact Martin’s favourite now and usually forms the closing course of a good meal in Little Caesar’s or at home, “after dinner, purely for medicinal and digestive purposes. You’re supposed to have it with an espresso – not in the same cup though!” he advises.

Not every night, a Friday or Saturday, you see we’re not wine or beer drinkers and when people hear Sambuca they think Holy God, shots! But we sip them, the proper Italian way. I’ve heard the kids slag us off because we sip it rather than do shots, I don’t know how many times I’ve called them into the room to play them the scene from the Godfather where they all sip Sambuca! “We normally skip desserts, and if we do have one we’ll share it,” Martin confirms on the all important sweet or savoury conundrum and Jenny agrees, admitting she must be the only woman on earth who isn’t overly partial to chocolate. “Dessert for me would be going back to Mr. Sam – Sam Maguire and Sambuca – this is my life!” Martin laughs.

Having laughed for forty minutes straight at the duo’s antics, I had to ask if we can expect to see Jenny joining Martin on the Six Couch and taking over the kitchen. “It has been suggested more than once that we should do it, and I would love it. She’d be great – she knows how to put manners on me!” Martin winks. With such genuinely positive energy and mile a minute banter, dinner at Martin and Jenny’s sounds like a howl and an even better TV show!