A Taste of Dark Nirvana by Simon Broderick 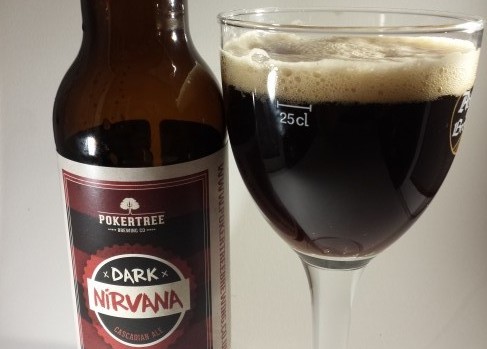 Nirvana. If you asked me who I preferred twenty years ago, Nirvana or Pearl Jam, Nirvana was always the answer without any hesitation. You couldn’t say both. I’d still say Nirvana if anyone cared to ask today. Ah the 90s were simpler times. I remember first hearing ‘Teen Spirit’ on Dave Fanning’s 2fm show. And MTV used to play music videos. Not just on the late night 120 Minutes or Alternative Nation either, during the day! I remember buying the cassette and bringing it home and my Ma asked what I had bought and I replied ‘Nevermind’, I may have gotten a clip around the ear for my cheek. That’s enough rose tinted nostalgia for one day though.

Apparently you can trace Kurt Cobain’s roots back to County Tyrone, the home of Pokertree Brewing. Dark Nirvana is an homage to that troubled genius. It’s a Cascadian Ale with a shot of espresso thrown in for good measure. I’ve had (and liked) Pokertree’s beers before but this one raises the bar. It’s well hopped with Green Bullet, Simcoe, Amarillo and Cascade. It has some black pepper and pine flavours. It’s one that you should spend some quality time with. Roy from QuareSwally.co.uk praised this one and named it as one of his favourite beers of 2014. He was bang on the money. It’s 6.5% so the 500ml uses up all of your, cough, recommended daily allowance of beer. That’s okay though as I don’t know what you could follow it with. Slàinte!