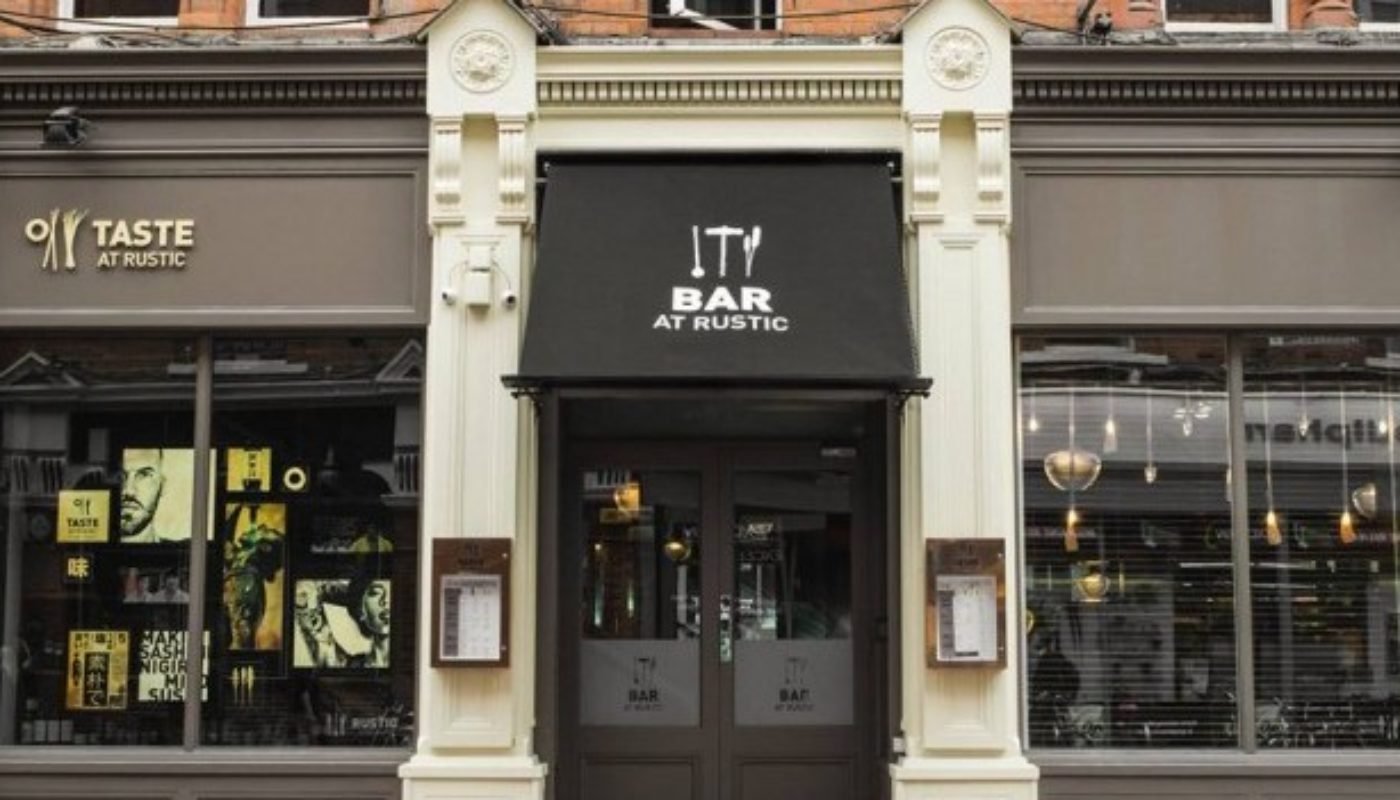 Dining in Taste at Rustic is so much more than mere eating; it is an experience for all the senses which leaves a lasting impression. There is a sense of drama in how your meal is presented and served to you but this theatricality cleverly involves the diner so that it does not feel contrived or that it is being used as a vehicle to mask or distract from mediocre food… and believe me, the food is good… VERY good!

There is a masculine feel to the dining room in Taste at Rustic with its black leather seating, dark wooden floors, red brick walls and sombre muted tones. The overall look suits the restaurant perfectly especially when juxtaposed against the lively atmosphere and the incredibly friendly personalities of the energetic waiting staff.

The restaurant is housed on the top floor and is in the same building as Rustic Stone which, along with the nearby Fade Street Social and Brasserie 66, form a quartet of highly popular restaurants owned by Dylan McGrath. Many people will recognise Dylan from his time as one of the judges on RTÉ’s MasterChef Ireland where his exacting standards reduced many a contestant to near tears. However, Dylan also has a real cooking pedigree and was Head Chef at the now defunct Mint in Ranelagh when it was awarded a Michelin star in 2008.

The menu in Taste at Rustic is the result of Dylan’s travels abroad, most notably in Asia and South America and is heavily influenced by Japanese cuisine. At first glance the menu is a little intimidating but the enthusiastic waiting staff take on board your preferences, offer guidance and make suggestions on which dishes to choose. Sipping on a Blackberry & Apple Crumble cocktail, a wonderful gin and gingerbread liqueur concoction, I felt emboldened to start ordering.

Tasting menus or Omakase are available with the three options costing €35, €50 or €70 respectively. Although we decided to go for the à la carte menu, it seems to me that the Omakase are competitively priced and ideal if you are feeling a little overwhelmed by some of the unfamiliar dishes and are not sure which to choose. They are specifically designed to give you the full experience of Taste at Rustic.

Each of the dishes on the menu is based on one of the five tastes – sweet, salt, bitter, umami and sour and whilst some of my choices were influenced by these categorisations, most were chosen because I was tempted by their description on the menu. As a prelude to our meal, we were served the most beautiful Brick Temaki, a cone-shaped amuse bouche of types which teased the taste buds in all the right ways. The crispy cone provided the perfect receptacle for the thin slivers of fresh fish which were served with an avocado purée and a sprinkling of black sesame seeds. It was beautiful to look at with a freshness on the palate that gave way to an appealing roundness of flavour in the mouth.

Starters/appetisers include a selection of warm (miso) broths, nigiri (hand-sculpted rice-based sushi) and maki (sushi rolls). These range in price from €2.50 to €4 for the broths and nigiri and diners are urged to select two or three each. The more substantial maki which consist of eight cut pieces are priced around the €12 mark.

Between us, my friend Eithne and I then chose three nigiri each. The nigiri surprised on a number of levels; firstly it was amazing how such complexity of flavour and range of textures could be packed into these mouthfuls and secondly how satisfying they were despite their diminutive proportions. Our choices were varied but were all singularly wonderful.

Of special note was the John Dory with Lardo Crudo, Smoked Olive Oil and Smoked Salt which possessed an initial sweetness that gave way to a restrained saltiness. I loved the Sirloin of Wagyu with Black Olive Oil which was altogether different and satisfied in an almost comforting way. Also wonderful were Eithne’s Smoked Mackerel with Spring Onion and fresh chopped Ginger which was fully of zingy freshness and the perfectly cooked Native Prawn gently heated with Sweet Lobster Butter.

The next section of the menu entitled Warm Bites/Sashimi has portions similar in size to the conventional ‘starters’ we would all be more used to. Keen to try all aspects of the menu we both decided to order a dish; Grilled King Crab for me and Pork Belly for Eithne. The crab was presented almost sacrificially on a flat stone and was stunning to look at. It was prepared with the diner in mind and the crab meat was easy to pick out of the shell with the chopsticks provided. It was a joy to eat and I loved the addictive yuzu sauce which was like a Japanese inspired interpretation of a classic hollandaise. The pork belly was melt-in-the-mouth fare. Initially braised, it was finished on the Robata Grill which gave the pork a caramelised and slightly smoky flavour. This was such a satisfying dish.

For my main course I chose Beef cooked in a Steaming Pot of rich Flavoured Stock. This dish is based on nabemono where ingredients are cooked together in a gently simmering stock. Seared beef arrived sliced and laid out for me to finish cooking to my own preference in the pot of stock which took pride of place in the centre of the table. One by one, using chopsticks I dipped my pieces of beef into the rich stock and let it poach before removing and eating. The beef was accompanied by a selection of baby vegetables which I also poached in the stock. When I had finished, my waiter took the pot of stock away but returned with it a short time later after it had been supplemented by carrot juice and reduced to make the most wonderful soup/broth that I have eaten in a long time. I still fall asleep dreaming about it.

Whilst I was working my magic with the stock pot, Eithne was having loads of fun grilling her Dexter Sirloin on the Robata Grill provided. The meat which had been brushed in reduced onion stock was unbelievably tender and succulent to eat. The steak was topped with dried and fermented bonito flakes which somehow intensified the meaty flavour of the beef when they were eaten together. This was such a simple dish, but really clever. To accompany our mains, we ordered Beignets of Short Ribs and Wasabi Potato. Both were outstanding and complemented our two different beef dishes perfectly.

I’m a bit of a dessert gal but I will admit that I normally struggle with desserts in Asian and Japanese restaurants as they often don’t appeal to me. In Taste at Rustic desserts, which are priced at around €7/€8 each, do not disappoint and must be tried. I ordered the Doughnut Sticks which were cooked in coconut oil and sprinkled with black salt. They came served with a most unusual but surprisingly light Sake Ice-Cream and a Miso Dipping Sauce. Oh yes! The plaited doughnuts were so soft and light and made me feel oh SO good! Eithne went for the Roasted Pineapple which although it had been poached in caramel still retained all its distinctive fruity flavour. The quenelle of Parmesan Cream with which it came was a revelation, cutting through the sweetness of the pineapple to create a dish that was so well-balanced. Taste at Rustic has a great wine list and also serves a well-chosen selection of sakes. We decided to go for the Junmai Ginjo Katsuyama ‘Lei’ sake which was beautifully smooth and quite astonishingly complemented both our beef mains and our sweet desserts.

My meal in Taste at Rustic was one of the most exciting and fun dining experiences that I have had in ages. This is knock-your-socks off sexy food that is seductive and exciting and leaves you wanting more!