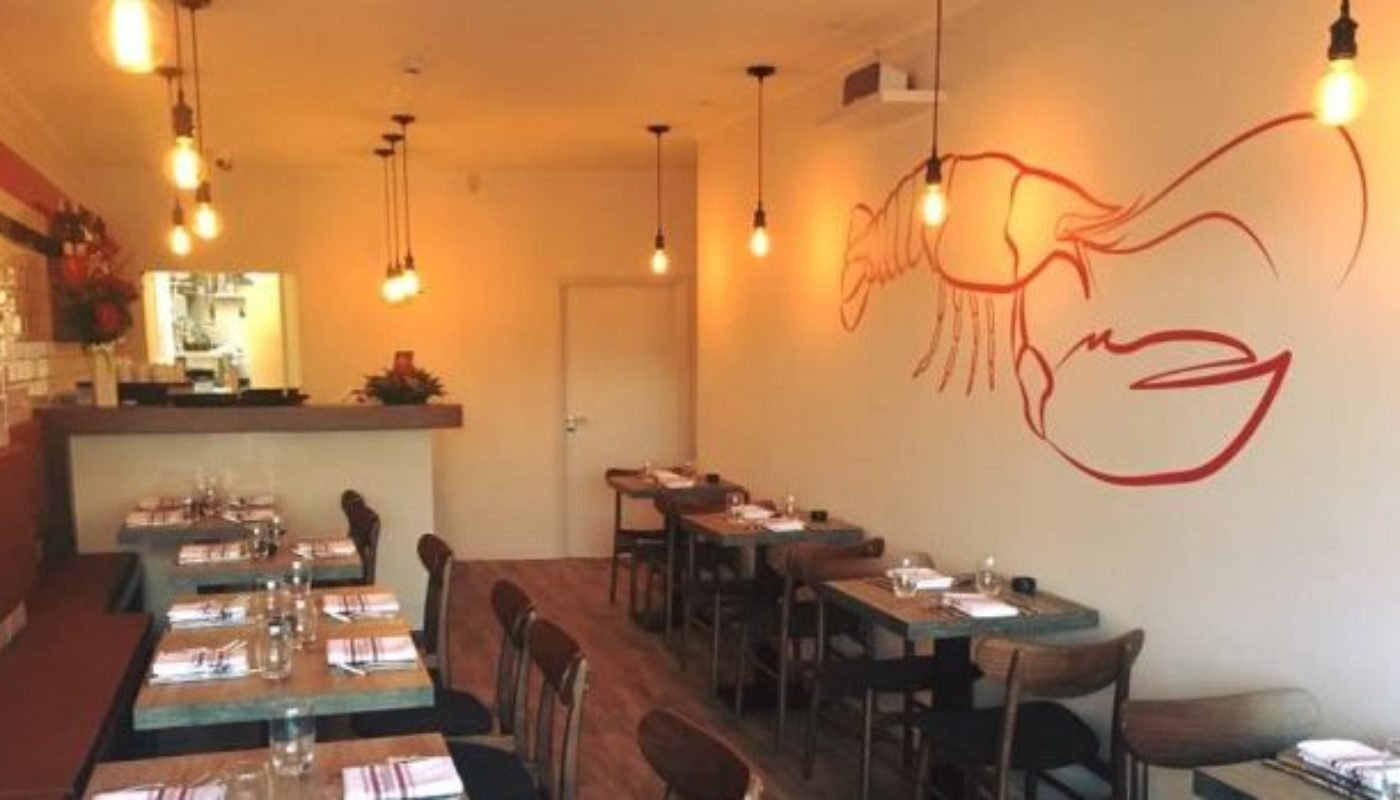 I think it is safe to say that south county Dublin’s seafood offering suffered a blow with the relocation of Fish Shop from Blackrock market to bustling Smithfield. The couple behind Fish Shop created a seaside haven for lovers of simple Irish seafood, treated with care and allowed to shine, but in their absence another couple has risen to the challenge of championing the best our surrounding seas have to offer.

Zsolt and Veronika Zakar themselves relocated from their native Hungary to the undeniably affluent Monkstown, just across the road from the so-called ‘Golden Mile’, opening their dream restaurant with Zsolt in the kitchen and Veronika warmly looking after guests. As bright evenings begin to roll in and walks on Dun Laoghaire pier become more frequent, I’ve found myself increasingly looking to Monkstown and the environs for places to reward myself for the exertion and the new kid on the block, Lobstar, was a little too tempting a pitstop. The menu surprisingly offers plenty of options for those not of a pescatarian persuasion, with chicken wings to dry aged delights in a dedicated steak section, but a post seafront walk feast had to kick off with treasures of the deep. Poke bowls are all the rage these days and I myself am partial to one, but it isn’t always the case that the key ingredient, the ceviche style tuna or salmon, is allowed to shine. In this instance, Tuna Ahi was a simple showcase of the freshest ruby chunks, adorned only with a splash of tangy citrus in the form of sharp yuzu, mingled with rich soy, toasty sesame oil and chilli.

It needed no more and no less to be entirely mouth-watering. Sourced from Ocean Marine from Dun Laoghaire, this may be a Hawaiian dish with Asian accents, but it is the finest Irish tuna that makes it sing, and this one hit all the high notes on the night. A side of charred and oiled rustic bread isn’t generally my thing but even I could see the allure on this occasion, even the simple features like this are executed well, making us anticipate delicious things to come. Before me sat a most elegant dish of Scallop, Black Pudding and Cauliflower. These three amigos appear united on menus across the country with good reason, demanding the best of each other, sweet, saline and seductively creamy all at once. That said, such starters rarely leave a lasting impression. In this case bourbon vanilla spiked cauliflower puree was an absolute knockout and we were so engrossed in the dish that I forgot to ask after the supplier of the rich and moreish black pudding, but if I had to hazard a guess the smooth quenelle felt like Inch House.

Sweet and petite queen scallops with buttery caramelised halos and the subtle scent of vanilla made for heavenly mouthfuls I can still taste, and am still craving days later. Likely the most enjoyable scallop dish I have had in recent times, we agreed we would return for this dish alone. That vanilla purée. Two exceptional seafood starters set the bar exceedingly high for mains, particularly the restaurant’s namesake dish. If lobster truly is to be a star, there are more boxes to tick than merely cooking it well. At Lobstar, the lobsters taking pride of place are sourced from Howth – not Canada or Maine, where lobster is plentiful and retails for roughly €10 per kilo. Painstakingly fetched with lobster pots, think about the laborious process and the higher price tag makes plenty of sense. These beauties are caught by Celtic Lobster, and all other seafood is sourced from neighbouring Dun Laoghaire, we were delighted to learn.

A blushing Whole Lobster (€34.95) appeared before me, split and grilled in butter for succulence, served with a delicious mango and pickled fennel salad (a fantastic bed fellow for lobster) and a barely touched bearnaise. Well crafted and richly tarragon scented, this was fine example of one of my favourite sauces but the star of the show just didn’t really need it, such was the tender mellow sweetness of the lobster meat itself, the result you only get from sourcing small but perfectly formed Irish lobster and treating it with respect. If you are torn over quality and quantity, it is one ingredient that is far more satisfying in the former than the latter and my whole lobster wasn’t overwhelming in size, but every last bite was ridiculously good. There are few things better than cracking lobster claws and savaging shells with a pick, and neither of us were willing to see any go to waste – this is lobster well worth getting your hands a little dirty for.

While we would gladly have both lingered over a lobster of such outstanding quality, in a bid to test more than the waters in Lobstar we opted to sample the 8oz Fillet Steak (€29.85) which could be accessorised with a half lobster (€13.95).

Had we known just how meltingly delicious those Howth lobsters were upon ordering then greed would have won over, but across the counter an artfully plated rare Sheelin fillet arrived atop golden caramelised onion puree and seriously umami-rich cep jus. Steak in a primarily seafood-centric eatery is given as much thought, care and attention as the title role and I can’t imagine a carnivore complaining here. Along with included sides of buttery rich almost mousseline-like mash and twice-cooked chunky Parmesan and Truffle Fries, this mammoth meal looked like dessert would be a bridge too far, but a shared Chocolate Mousse seemed doable. I thought I had brought a non-dessert person with me, but a cloud-like mousse with smatterings of crunchy dehydrated sea salt chocolate cake powder had other ideas. Pureés of both raspberry and mango spiked with basil cut through rich cocoa and played on the tongue with a hint of popping candy – a pleasure to devour, I only wish I hadn’t agreed to share.

I love sharing, so much so I wrote an article about it and I love the counter in Lobstar, but my usual generous nature with food was put entirely to the test and the counter, the best seat in the house, made it a little too easy for a wandering fork to pillage my precious dishes…prepare to feel more than a little shellfish when dining in Lobstar. As night falls the cosy dining room becomes even more inviting, full to the brim and turning people away at this point. There are many accents making up the buzzy background music in this little eatery and each seems to echo the same sentiment we arrive at by the time to leave regretfully comes around – Lobstar is shining bright and doing something very right indeed. Our bill, excluding service with a glass of wine each came to €116, for what we considered to be a feast well worth make a dedicated trip to Monkstown for.

Lobstar was a case of fights over bites and high point after high point from the first plate. If I garnered as many advances and longing glances on a night as that scallop dish I’d be rather big headed indeed, but Lobstar isn’t. There is a sense that they perhaps don’t know how good what they are doing is, which adds to the allure and chilled out ambiance. Lobstar is all about celebrating beautiful Irish seafood without too much fanfare – superb shellfish without stuffiness. The golden boy of Monkstown, it seems, doesn’t sit on the Golden Mile after all.