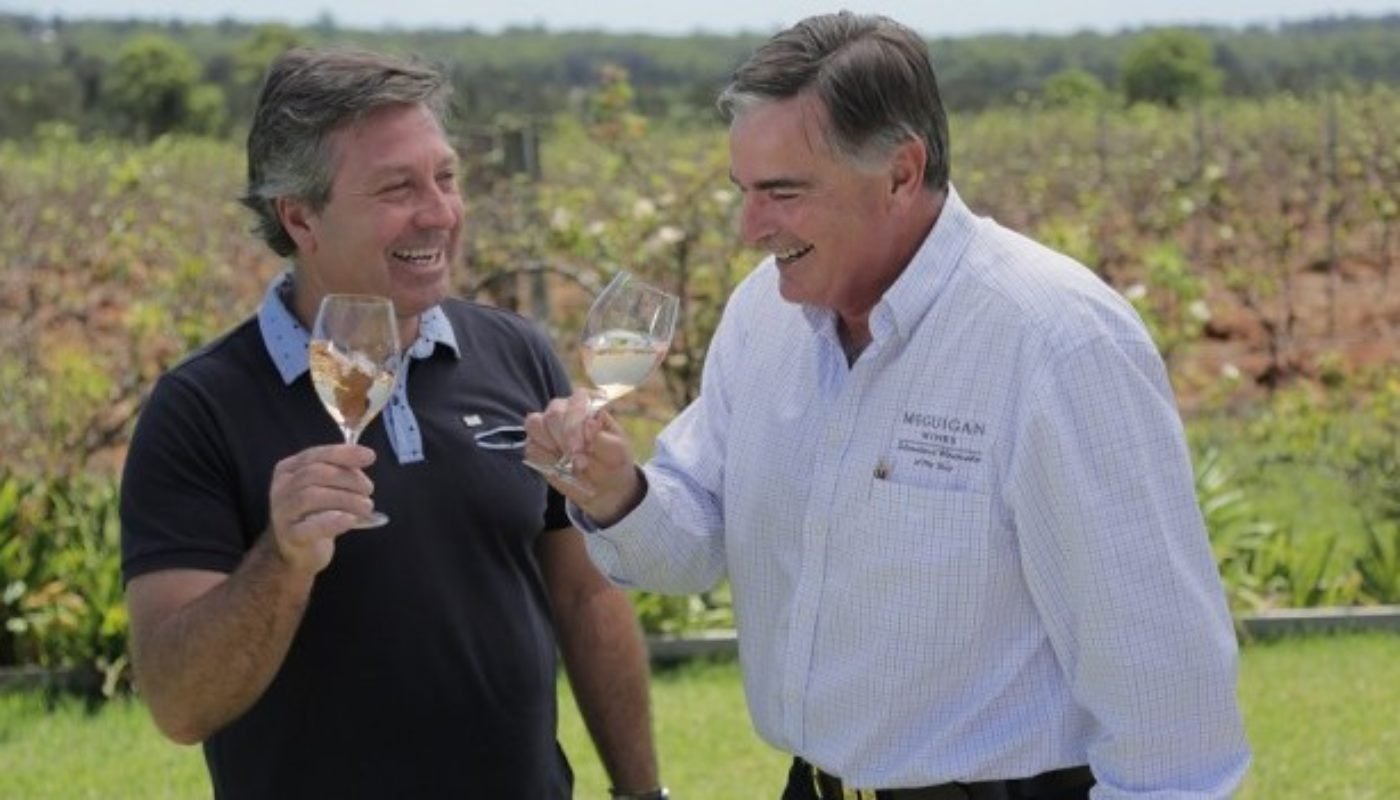 Food and wine go together like lock and key, pen and paper, and fish and chips. Wine making and culinary traditions have evolved together, to the effect that a glass of wine can transform a meal from a dreary daily ritual into a memorable dining experience.

At an exclusive food and wine pairing in Dublin recently, two food and wine aficionados, chef John Torode and chief winemaker Neil McGuigan, of McGuigan Wines, demonstrated the magic of the classic combination. But you couldn’t help but notice that the spark between this duo creates a chemistry that could in itself be bottled.

Leading Australian chef, and co-host of Masterchef UK, John was introduced to Neil, one of Australia’s most celebrated winemakers, through a mutual friend. Though they are masters of different, albeit symbiotic, realms, both are from the oldest wine making region on that vast continent, the Hunter Valley. In 2013 they formed a partnership based on another commonality; a passion for demystifying food and wine matching, making food and wine more approachable to more people.

“This is one tiny project for Neil,” says John of his friend and business partner; three times IWSC International Winemaker of the Year, and fourth-generation Australian wine maker at of the world’s most awarded wineries. “Neil is hugely, hugely influential, makes a huge amount of wine, does a huge amount of work.” In true bromance fashion, Neil interjects:

“John is playing it down. He has stretched my mind, and made me realise that I’m not just in the wine business, I’m in the wine and food business and he has given me a different perspective to what I should be doing.”

The event, showcased McGuigan Wines latest collection, the Founder’s Series, a trio of limited edition wines that from three wine regions across Australia. “The Founder’s series is in recognition of the impact our founder, my big brother, Brian McGuigan has made – not only to our company, but to the Australian wine industry,” says Neil. “We’ve tried to get wines that are typically Australian, that are also food wines,” Neil explains, and that’s where John came in, creating recipes that perfectly, if not unexpectedly, match each wine.

There are books, magazines, and blogs dedicated the principles of pairing the perfect wine with the perfect dish, but John is determined to get people to look beyond the old adage; ‘white wine with fish; red wine with meat’.

“I think there are some classic matches, but at the same time you are allowed to question those matches. I think if you’re outside in the sunshine and someone is cooking a steak, and tomato salad with some rocket, you are allowed some really nice Frizzante.”

“Look what happened today, would you ever have had a Cabernet Sauvignon with fish?” asks Neil, referring to the Roast Fish, Champ, Capers, Parsley and Black Butter dish we had just enjoyed, paired with the Founder Series Shiraz. “No, and neither would I, but that was absolutely outstanding, and it was the fact that it over delivered on what you thought is what made it exciting. We could have sat here, John could have done a nice piece of steak, and we could have had a nice Shiraz, and it all would have been very nice. But that’s what this is all about – saying the rules are not the rules, you can take things off in tangents and enjoy them.”

“We want to take people on the wine and food journey together. We don’t want to make wine and food intimidating to people whatsoever. We want to bring people into our restaurant and our winery, and take them on the journey, let them discover what it’s all about.”

John recalls 20 years ago that when he first put, the then usual, pork belly on the menu at his restaurant Smiths people were intimidated, but by pairing it with something ‘safe’, that everybody loves, mashed potato, customers began to take a chance on the dish. “Sometimes what you have to do is introduce people by giving them a little bit of safety, making them feel happy, and relaxed, and then add something new. The Rosé is a great example of that. What we are doing is taking a brand that people are loyalty to, McGuigan, and adding something quite new, especially for the Irish market, Rosé, and I think that’s an exciting prospect,” John explains.

John is talking about the second in the MT (McGuigan Torode) wine, a Pinot Noir Rosé. Their first collaboration was a classic, limited edition Hunter Valley Semillon, so choosing to create a Rosé could be seen as risky. “I don’t think its off piste at all,” says John.

“Since 2009, Rosé has been outselling all white wine in France, and in 10 years Rosé is predicted to outsell all white wine in Australia. This is the future. If you go to the streets of London or Manchester, everyone is drinking Rosé. It’s an everyday wine, for everybody – and that’s what it says on the label.”

Earning the ‘brosé’ nickname in some circles, John agrees that Rosé wine is becoming increasingly popular with men too. “On Sunday I was in Barrafina, in Soho central London, with my girlfriend Lisa having some food, next to us was a guy in suit, with very shiny shoes, with tassels on them and gold studs all around back of them, and a big sovereign ring. He was a bouncer in Soho – he sat down and had a plate of prawns with a glass of Rosé with ice, then he had another glass of Rosé, five glasses of Rosé that man sat and drank. He’s the man you think whiskey and coke, maybe a beer, no – Rosé. It is the future! In a couple of years’ time you will come back and say ‘ahh John was right’”.

And how does Neil feel about John’s controversial predictions? “If someone told me 15 years ago that the biggest selling wine in Australia would be New Zealand Sauvignon Blanc, I would have said you’ve been smoking too much – so it could go that way”. “That bouncer that John was talking about would have had bourbon and coke 15 years ago. Wine is fashion, wine is a trend, so we need to find what is the next thing.”

John had a vision to create a wine that goes with “anything, anywhere, any time”, but most importantly brunch. “What was important for me is that our Rose went with brunch, and that means it had to go with eggs. When I taste Australian Rosé there is a very strong strawberry flavour – and strawberries and eggs don’t work.”

Meeting John’s demands was a challenge, says wine maker Neil. “Rosé was tough, it was a hard call. Because you have to get the style exactly right to go with a huge range of foods and to fit the parameters John set. Getting the tannins just right was challenging.”

You need to continue to be innovative. You need to continue to make the classics in the classic way, but you also need to take those varieties, and different varieties, and give different flavour sensations. For example what we’ve done with the MT Rosé. That’s taking cool Adelaide hills Pinot Noir into an area that no one else has ever done before. We’ve got to bring different things to the consumer to keep people excited about wine.

These two Hunter Valley lads are only at the beginning of their journey.  “I am learning more and more about food, I’m understanding the customer better than I ever had before. We’ve only just turned the surface on this. There is a lot to be done to take people on the wine and food journey,” says Neil. John agrees: “We both have no agenda. It just sort of happened. It wasn’t a planned thing, but what we have done over the past few years is actually grown into this thing that is starting to have momentum, people all over the world are starting to take notice now.”

If the Torode – McGuigan connection could be bottled, much like the new McGuigan Frizzante, it would bubble with character, and sparkle with a good dose of brotherly humour.

After a thought-provoking, and palate stimulating three course food and wine tasting, I asked the pair if there are any other drinks that they enjoy with food. “Only wine goes with food, isn’t that right John?” jests Neil. John laughs, adding: “Interestingly enough, Neil is like very few other people I have ever met. I don’t like beer, and neither does Neil – it’s like I’m a bad Australian because I don’t like beer!” And when it comes the classic Irish beverage Guinness, according to John all that pairs well is “another pint of Guinness and a chat. Guinness is a meal in itself!”

McGuigan Wines are available in all good wine stores and supermarkets in Ireland, and online at www.winesoftheworld.ie.