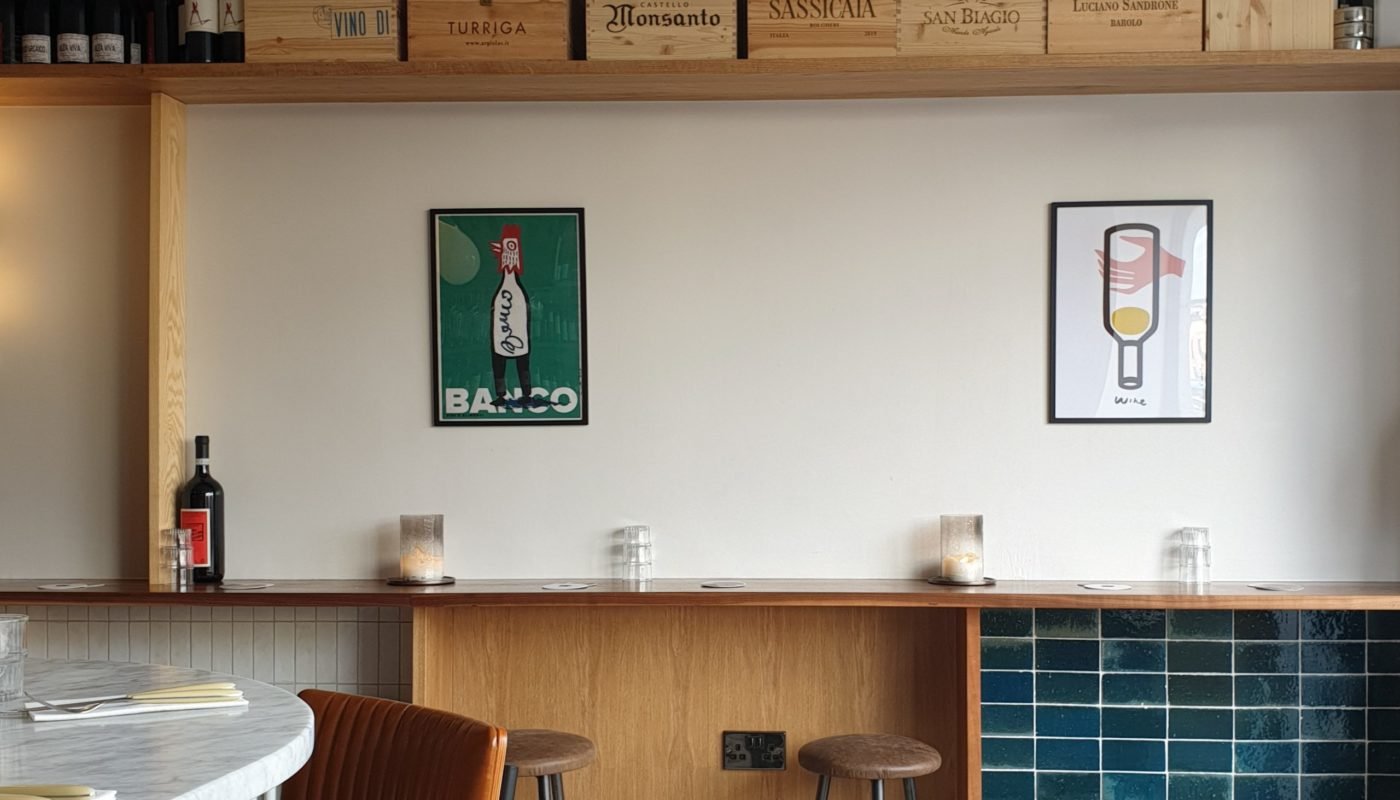 Home » A Magic Moment on Manor Street – A Fianco Review

A Fianco is the self-proclaimed “little vineria packed full of all sorts of Italian wines“that opened its doors in July 2022. Situated a fianco, next to Grano, it’s sister restaurant, owned and run by Italian born Roberto Mungo, A Fianco is an assured, quintessentially Calabrian affair on Manor Street in Stoneybatter. The interiors are sleek, yet warm; the service is welcoming and swift but never rushed; the food is uncomplicated, rustic and delicious but the real showstopper is the all Italian wine list packed full of possibilities.

As of yet, A Fianco doesn’t take bookings and it’s easy to see why – they fill up quickly. We arrived at 12:31pm, eager to secure a spot at the bar (which we did) and within an hour there were two other groups perched along the countertop. As well as the bar, there are about four other hightop counter spots along the wall, four low seats at the window where you can watch the hustle and bustle of Manor Street pass by, and several tables outside for the hardcore diner.

We were excited to dine here having passed by on several occasions and seen every seat occupied. It is the perfect spot to stop off for a bottle of wine before your booking next door or like we did, while away a Sunday afternoon working your way through their array of seasonal small plates.

We started with a vermouth (€7) while perusing the wine list. They import all of their own Calabrian wines so there were many we weren’t familiar with and lots to choose from no matter your price range (€31-€420). The list is very user friendly, split into ‘Sparkling’, ‘Calabrian’, ‘From the South’, ‘From the Centre’, ‘From the North’ and ‘Orange’. The majority of wines are organic, biodynamic and/or part of the collective Federazione Italiana Vignaioli Indipendanti who champion small producers- music to our ears! Overwhelmed with choice we asked Richard, manager and host, to steer us in the right direction, which he expertly did.

We had a bottle of Oi Centodi Zibbibbo (€57), a golden straw coloured Calabrian (we had to!) white wine with 24 hour skin maceration. The wine was beautiful with papaya, lychee and mango springing out of the glass and a more delicate layer of camomile, dandelion, hay and honeysuckle coming through as well. On its own the wine was very approachable and easy-drinking but the real triumph was that it paired well with almost all of the small plates we had which meant we didn’t need to splash out on a second bottle, tempting in its own right given the sheer amount of choice.

We started out by ordering three small plates to get the lay of the land and ended up ordering four more, a cheese course and a dessert to share. The food is very reasonably priced and the portion sizes make it all too easy to try lots, if not all, of the dishes. Our first plate was Baccalà Mantecato (€7) – whipped salted cod, on crusty white baguette and topped with a delicately fried Senise red pepper. The potato/salt cod ratio made this a very accessible appetiser as it was definitely more spud, less salt cod. It was a good gateway into the meal and the smokiness and crunch of the pepper was a real treat.

The next small plate was, by far,  the standout of the day. Crostini alla Tropeana (€7.50) – nduja, fresh tuna, and caramelised Tropea red onion on toasted bread. The flavours of this dish were perfectly in tune. The nduja had a warm kick to it, the Tropea red onions were sweet and succulent and neither overpowered the delicate, silky tuna. The florality of the wine shone through here with honeysuckle and acacia notes at the forefront. It was a magic moment on Manor street and we would go back for this combination alone.

We couldn’t resist ordering the Turbot with girolles mushrooms and artichokes (€13). This seemed like a no-brainer to order but rather surprisingly got lost amongst the other dishes. We expected this to be the star of the show but it was actually a little dull, the textures were all too similar, the turbot was earthy with a gelatinous skin that really needed to be crisped up to be consumed and the artichoke was woody. A small blip in an otherwise enjoyable experience!

We opted for the special of the day next which was Langoustines in a pamplemousse dressing (€13). The prawns were succulent and meaty and we genuinely could have eaten buckets of the buttery and tart pamplemousse dressing. It was a moreish marriage and the wine worked ever so well here too.

Next up was Tigelle (€7.50) – typical Bologna style bread filled with mortadella, stracciatella cheese and pistachio. Somewhere between a crumpet and a cracker, with wafer thin slices of mortadella and creamy fresh cheese oozing out over the sides. This was a simple and well executed bite size snack.

We followed this with Capocolla suino nero crostini (€7.50) – Calabrian black pig capocollo ham (from the neck of the pig), more of that delicious stracciatella cheese and Calabrian sun-dried tomatoes on toasted bread. The black pig capocollo was nutty and beautifully marbled, the Calabrian tomatoes sweet and full of flavour and a basil garnish tied it all together to make it an ideally Italian combination.

We were nearing our gluttonous limit at this point but powered through because we wanted to try the Polpette alla nduja (€5.50) – spicy meatballs with tomato sauce and smoked ricotta from Calabria. This came with a side of bread but we ate the meatballs alone as we had already consumed the guts of a baguette at this point. We ordered a glass of Brenda with this, a biodynamic montepulciano, sangiovese, magliocco blend from Calabria. This was structured and broody with great sapidity and lovely savoury notes.The meatballs were juicy, tender and smokey with a whisper of spice. They were traditionally Italian in texture – closer to sausage meat than to the bind of an American meatball.

There were two cheese options – 40 month red cow parmigiano cheese (€6) but we plumped for I Caprini della Signora Maria (€7.50),  two types of artisanal Calabrian goats cheese made, quite simply, by Maria.These were a joy to eat and although sharing the same milk type, they tasted poles apart. The first, slightly younger one was sweet and acidic with hints of white chocolate. We were advised to eat the homemade fig jam with this one and it was a pleasant combination.

The second, more mature goat’s cheese was on the more savoury end of the spectrum, and had notes of walnuts and almonds. Its density was reminiscent of a pecorino sardo but with goat’s milk instead of sheep and the sweet chilli jam that came with this balanced out its salty edge. We shared a glass of Sketta (€7.50) with this, an organic Sicilian white made from greciano and it was rich and nutty with notes of golden apples.

We polished off our meal with the deconstructed Cannolo Siciliano with pistachio, dark chocolate and orange zest (€6) and it was a delightful note to end on. The flavours and textures were beautifully balanced. It was light and fresh yet had an autumnal warmth from the dark chocolate and orange peel. Under Richard’s guidance, we paired the cannolo with a glass of Mire (€8), a dessert wine made from grapes that have been semi-dried before fermentation. It was bursting with the flavours of a black forest gateau – sweet cherries, cocoa and a slight hint of liquorice.

We finished with a swift amaro (€6.50) to aid our digestion and then in the most authentically Italian way we were presented with two shots of complimentary limoncello – a fitting end to a fiercely Italian experience.

Rarer than hen’s teeth in the current climate, the food was incredible value for money and we left very well fed. Our bill for two people in A Fianco came to €180, excluding service, for seven small plates, a cheese course, one dessert, a bottle of wine, two glasses of vermouth, three glasses of wine and an amaro.

The service was charming, sharp and knowledgeable and the overall dining experience was tremendously enjoyable and worth every penny. There is a warmth and homeliness to the room that can be felt instantly and it was obvious that the team behind A Fianco have already established themselves in the hearts of the Stoneybatter community, with people dropping in for a quick hello and regulars being welcomed over the threshold for another visit. The wine list completely won our hearts and we see a return for this alone in our not so distant future.

Philippa has worked in many facets of the food and wine industry since she was 18, from cheese shops to wine bars to restaurants to grocers. She spent a year in New York training as a cheesemonger in the Bedford Cheeseshop and has completed her level 3 WSET in Wine. She is fiercely proud of the quality of Irish produce and not only does she love to eat it and sell it but she loves to write about it too. Philippa is also a food guide for Fab Food Trails and when not working enjoys a dip in the sea, drinking wine and mildly obsessing about her dog (sometimes in quick succession).