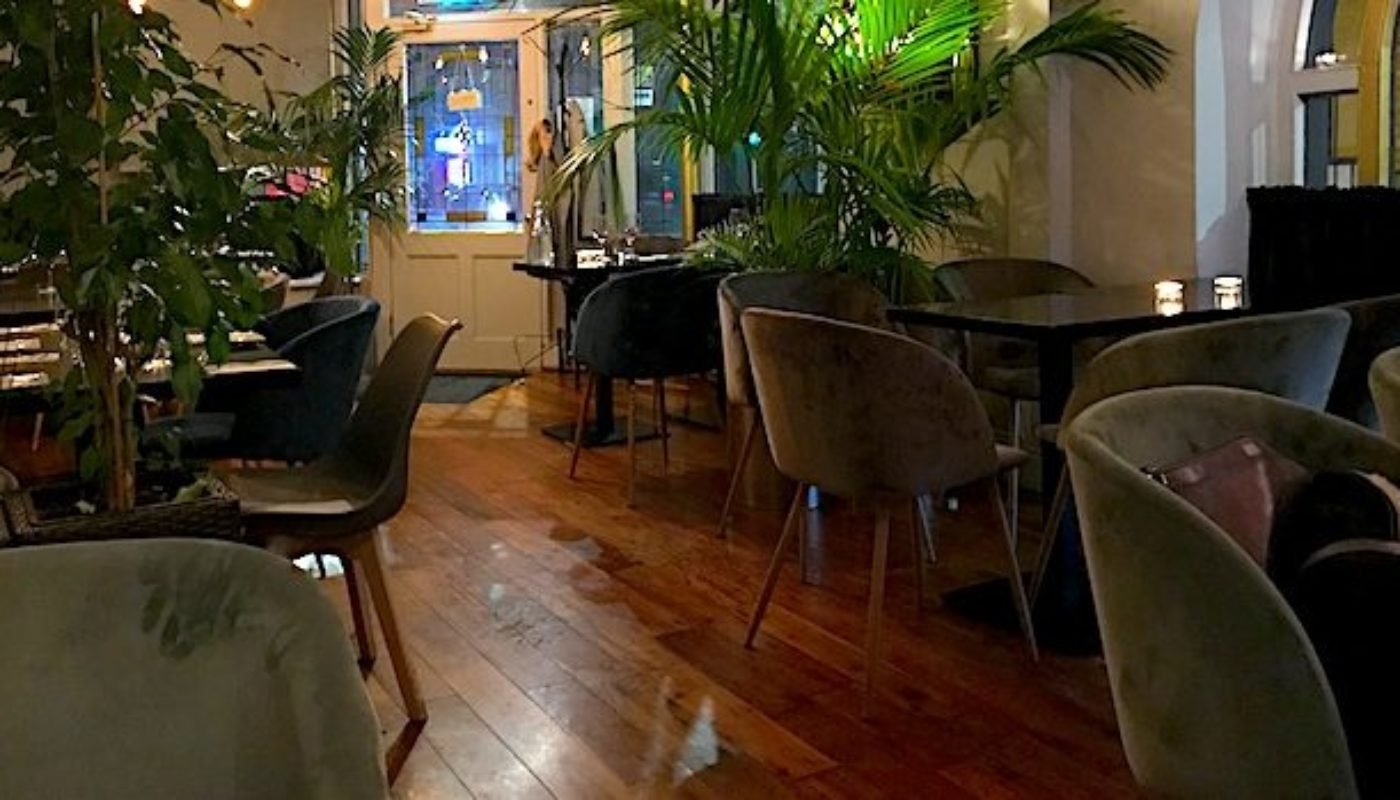 A Feast of Fusion and Flair – Feast Dun Laoghaire Review

In the age of rising restaurant rents and neighbourhood eateries popping up where you least expect them, in many cases with young and ambitious chefs at the helm, there has never been a better time to think outside the D1/D2 post box when it comes to outsourcing the task of cooking to the experts.

While many suburban spots, from Craft in Harold’s Cross to D8’s Bastible and Clanbrassil House, have captivated us with the allure of casual dining with a laid back atmosphere and serious plates, the further you venture from the epicentre the weaker the shockwaves of this dining revolution become. Seeking to turn the tide in Dun Laoghaire is a relative newcomer to the seaside town so often derided for a lack of desirable dining destinations, and when we arrive there is scarcely a free table in the petite dining room, packed with locals. This dreary Wednesday night saw no midweek slump in Feast.

Chic greys and navies, velvet bucket seats and rope-hung filament bulbs make for a minimalist, perhaps vaguely nautically-inspired space, with walls lined with wine bottles from delicious evenings past. Seeking to marry a host of cuisines together to create a unique taste of ‘overseas cultures’, the menu certainly read like an expedition to faraway lands – but how would this ultimately play out on the palate, we pondered. House-made Tomato Bread staved off our collective hunger as we deliberated, and more than satisfied with a punchy Spanish-inspired manchego, smokey paprika and red pepper dip which was almost good enough to eat with a spoon. Add in juicy kalamata olives and a glass of Chardonnay Voignier and we were off to a tasty start. Being so close to the coast, a sampling of seafood was a must, and plump Gambas (€11.50) were succulent and well balanced, surprisingly delicious with Middle Eastern hues owing to Ras el Hanout, the Moroccan equivalent of garam masala. Warming cinnamon and cardamom worked a treat, bringing out the inherent sweetness of the shellfish, along with parsnip purée and the satisfying crunch of a poppadum crown.

A devout fan of the purple-hued nightshade, I couldn’t resist a combo of two of my favourite things, Grilled Aubergine & Goat Cheese(€8.50). Lithe aubergine slivers were draped in Tipperary goats cheese, whipped with yoghurt to a creamy and almost burrata-like oozy consistency, studded with sweet pomegranate jewels and sticky pom molasses drizzle. Toasty sesame-spiked Dukkah, the nutty and warming Egyptian condiment so delicious it should have a place on tables from Cairo to Cavan, finished a tempting opening dish which saw me wishing I had a little more.

Both starters sang of the souks and this is clearly a kitchen very comfortable balancing international influences with Irish ingredients – refreshing, as in so many instances, fusion food can be a flustered flop.

Treking back to closer climes, a delicate seafood stew, again paprika spiked but this time, balanced with fennel’s aniseed edge along with lactic and slightly sweet kefir, sat below a rather nicely cooked Seared Halibut (€24.90) fillet. A scattering of clams and mussels, peeking out of their shells and perfectly poached along with the fish in a flavour-packed broth, completed a light yet well pitched dish which would have been best enjoyed on a summer’s evening, post pier stroll.

Across the table, the polar opposite of the dainty seafood creation, a hearty Hungarian-inspired dish saw one of our finest ingredients, Wicklow Venison Haunch (€28), married with goulash, sour cream and semolina dumplings. This was a little taster of chef Laszlo Kamondi’s Eastern European routes, both rib-sticking and robustly flavoursome, with three generous and bruisingly rare cuts of venison as well as slow braised nuggets for contrast.

Herby and well seasoned semolina dumplings lacked the stereotypical stodginess of the traditional crowing glory of a goulash and completed a satisfying and warming dish – almost medicinal in the face of the bracing cold air scratching at the door.

Almost defeated by the mammoth and modern take on a classic goulash, sharing a dessert to round out our feast was the only option when faced with an utterly tempting proposition – Deep Fried Chocolate Ganache(€7.50). Let those words sink in. An ode to the Scottish deep fried Mars bar, perhaps? In truth, who cares? This was as stupidly delicious as it sounds, with a crisp crust giving way to flowing molten chocolate, almost audibly whispering “I’m sexy and I know it.”

A hint of popping candy, Christmas-scented brioche with all the associated comforting spice and necessarily sharp and contrasting orange completed a sassy, original dessert which, although unashamedly indulgent, stole the show. The dots of yoghurt make it healthy – right?

Settling a bill of €94.90 for two starters, two mains, a shared dessert and two glasses of wine, I was pleased not to have the task of driving us home, so frenzied was I after my love at first bite encounter with deep fried ganache – I’m still a little distracted thinking of it now.

Feast delivers exactly what it sets out to, serving dishes with flair and imagination in a town where once there was little of either. There’s the makings of a neighbourhood hero here, and something tells me the gang behind Feast have only just begun to test the waters.