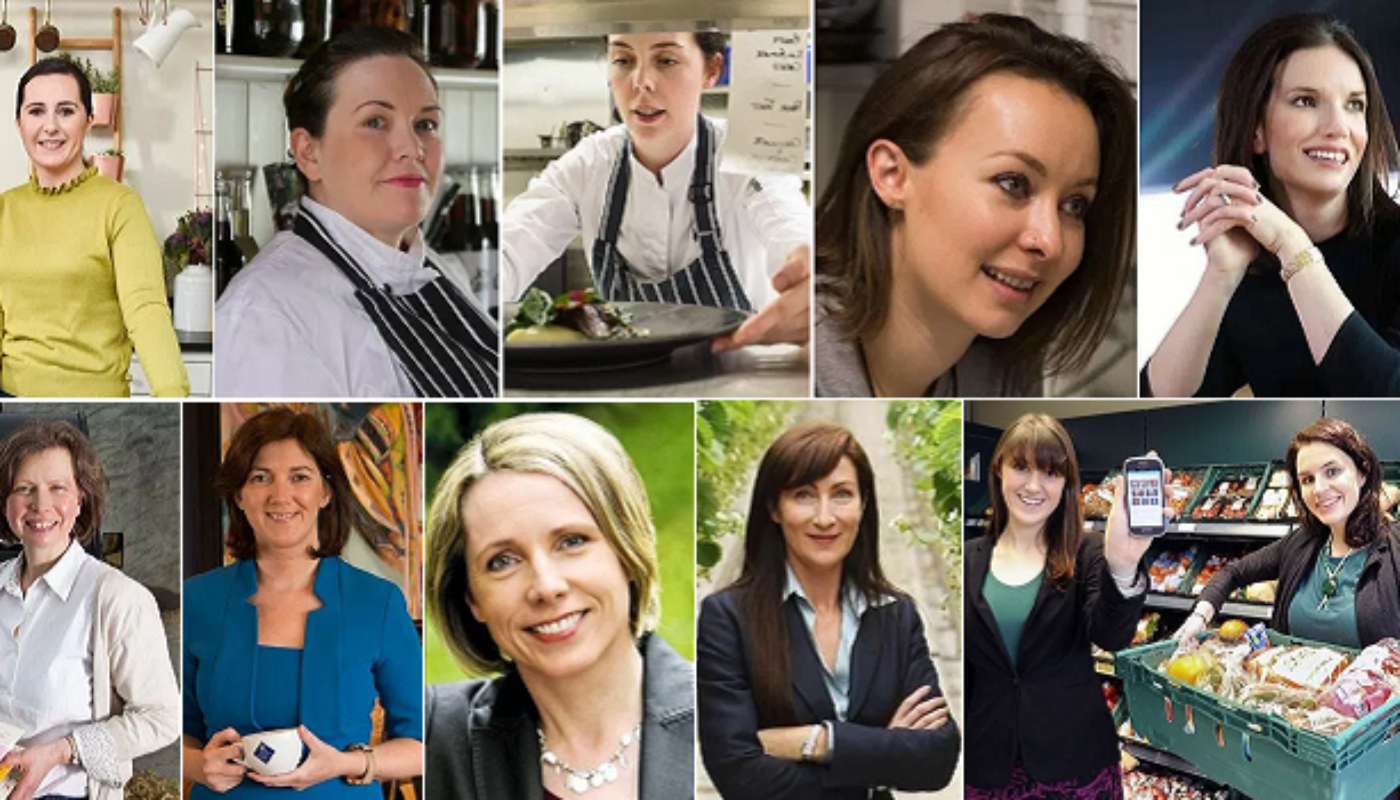 Home » The Game Changers: 10 Inspirational Women in the Food and Drink Industry

The Game Changers: 10 Inspirational Women in the Food and Drink Industry

Hear that sound? What you’re hearing is the crack of a glass ceiling and the din of voices rising – it turns out plates aren’t the only thing that are getting smashed in the kitchen.

The same sound is echoed in the boardroom, on the farm, and in the lab, as women right across the food and drinks industry grab headlines for all the right reasons: female chefs competing against the boys and winning awards, food entrepreneurs turning bright ideas into supermarket success stories, and women taking the top roles in huge multinational companies.

We selected ten women, and are glad to say it was a struggle to choose only ten, who are inspiring females (and males too) across all sectors to keep smashing those ceilings and breaking down barriers. To title Hilary O’Hagan Brennan simply a chef would be to massively undersell this force for change within the Irish food industry. While she may be Executive Chef of 3fe Coffee, she also runs her own food consultancy and catering business, is the star chef on RTE One investigatory series ‘What are you eating?’ and is a co-founder of food conference Athrú, which is centered on discussing gender equality and creating a database of Ireland’s female chefs. Her pioneering work in this area has seen her as a guest speaker at 2016’s MAD Symposium in Denmark, organised by René Redzepi’s team at Noma, as well as Parabere Forum, and later this year she’ll help put on another Athrú conference, keeping the discussion on the issues women face in kitchens alive. Her biggest project yet with 3fe is in the works too. What Caroline Keeling thought was a two-year spell working in the family business turned out to be the start of a career spanning 20 years. Now CEO of Keelings, which she runs along with her brother David, Caroline has created one of Ireland’s best known family businesses which first began producing fruits and salads on their farm in the 1930’s to supply local Dublin markets. Still one of Ireland’s leading growers, Keelings now also source the best fresh produce from around the world and have operations in the UK, Europe and Asia. Along with being responsible for creating over 2,000 jobs, Caroline is an ambassador for The Women’s Fund for Ireland, a Bord Bia Board Member, Chair of Dublin Action Plan for Jobs Implementation Committee, and member of the Export Trade Council among other roles. A story of sweet success that is sure to inspire a crop of future female leaders. Although she may hail from New Zealand, chef Jess Murphy has well and truly been accepted into the Irish food family. Her restaurant Kai in Galway continues to earn acclaim as one of the best on the West coast and in 2015 Jess herself named Best Chef in Connaught at the Irish Restaurant Awards, the first female chef to receive the regional accolade. Alongside fellow game changer Hilary O’Hagan Brennan, she instigated recent discussions around gender equality by founding Athrú, though gender imbalance is not the only major industry issue Jess is actively tackling. Two years ago she was a guest chef at Refettorio Ambrosiano set up by chef Massimo Bottura cooking waste food from Milan Expo, and last month Jess was one of a starry line up of chefs who took part in Bottura’s Refettorio Felix project in London using surplus food from supermarkets to cook at a drop-in centre for homeless people. When Louise Ryan was appointed as Managing Director of Irish Distillers in July 2017 she assumed the mandate to continue the smashing success of a company that has portfolio of some of the world’s best known spirits and whiskies, among them Jameson which has recorded 28 years of consecutive growth. The company knew their legacy was in safe hands with Louise who had proved her business acumen and leadership abilities ever since joining the company in 2011, first working as Head of Business Development and then as Strategy & Insights Director. With three young children, the former Commercial Director at Mars Ireland is proof that achieving a life work balance while fulfilling your career goals is possible. We’ll drink to that. Born in Mayobridge, Co Down, chef Danni Barry worked in kitchens all over the world before being head hunted by legendary chef Michael Deane to take over the reigns of Deane’s EIPIC in Belfast. After only 18 months the chef, now 31, bagged a Michelin star, making her the only female Michelin star chef in Ireland. Now regarded as one of the UK and Ireland’s foremost chefs, this year Danni was named Ireland’s Chef of the Year. Using her status as a tool for change, during a panel discussion at 2016’s Food on the Edge she gave an impassioned speech on what she feels is the key to countering the macho-kitchen culture, education. Committed to demonstrating how a career as a chef is a viable one, Danni continually offers opportunities to young chefs from around Ireland and the globe to work alongside her. The coffee industry in Ireland is hotter than ever with a dramatic rise in the number of speciality coffee shops and artisan roasters. Despite this competitive market Ireland’s original roaster, Java Republic, is still an industry leader, with much of that credit due to Managing Director Grace O’Shaughnessy. At Java there’s little she doesn’t do, from crop to cup she takes every factor into account in order to achieve the best tasting quality coffee and speciality tea. Grace’s success had been brewing for a while, since 2006 to be exact when she joined Java Republic as Operations Manager, prior to which she honed her skills working with other Irish brands Lir Chocolates and Kylemore Foods. Since taking the top job at the caffeinated company she has been behind landmark moments for the long established company, including signing a headline contract with Aer Lingus in 2015 and opening Java’s first high street cafe in 2016. The number of health eateries in Dublin has exploded in recent years, but Cocu was ahead of the curve when it opened its doors in 2015, and now with a total of three eateries across the city continues to be a unique and innovative player in the market. The woman behind the success is head chef and founder Emilia Rowan who after time spent travelling recognised a gap in the Irish market for fast, affordable wholefood options. Over the past few years, the business acumen of the trained chef has developed alongside the company’s portfolio, which has expanded to include dinner pop ups and corporate catering. This year Emilia was accepted onto the competitive Going for Growth programme, designed to support women in business, which will surely see this ambitious industry player set new targets and continue to keep the diners of Dublin surprised. When Valerie Kingston began selling homemade cheesecakes at her local farmers’ market in 1997 she might not have imagined that 20 years later she would be the owner of one of Ireland’s most successful food brands, turning over €16 million in 2017. Still using the milk from the family farm in Drimoleague, West Cork, Glenilen Farm‘s portfolio now includes dreamy dairy-based desserts, cheese, yoghurt, butter and cream. The company has successfully made the leap across the water earning contracts with the likes of Waitrose, Selfridges, Fortnum & Mason, and most recently secured as contract with Sainsbury’s to supply their yoghurts to up to 350 stores – proving to us that there’s a market for premium Irish branded food products in the UK in spite of Brexit. Currently in the process of investing €1.2 million in their facilities in west Cork, Valerie and her husband Alan now have their sights set on conquering the continent, notably Germany, where there is a strong appetite for Irish butter. From the sustainability focused initiative Origin Green, to the annual Bloom festival in Phoenix Park, Bord Bia‘s mission is to grow the success and promote Ireland’s world-class food producers and farmers. Leading the charge is Chief Executive Tara McCarthy, who before her appointment in early 2017 demonstrated her leadership capabilities during a 20-year career in the agri-food industry, holding a number of senior positions with Bord Bia and most recently that of CEO of Bord Iascaigh Mhara, the state agency responsible for developing the Irish seafood industry. With an ambitious exports target of €19 billion in her new role Tara will work closely with all stakeholders, including farmers, food manufacturers and producers in order to reach that goal. In her spare time she also is a board chair at Blossom Ireland, a Dublin-based children’s charity. Getting a nod on this list will surely be appreciated by entrepreneurs Iseult Ward and Aoibheann O’Brien, but after being featured on the likes of TIME magazine’s ‘Next Generation Leaders’ list and being named among Forbes ’30 Under 30′ honourees it probably won’t be much of a surprise, and the recognition is well deserved. Fresh out of college, Dubliner Iseult Ward and Galwegian Aoibheann launched Foodcloud, a charity app that allows local charities to avail of surplus foods from supermarkets, farms and food manufacturers, redistributing the equivalent of over 12,074,197 meals to homeless shelters and other groups across Ireland and the UK since Decemeber 2016. Foodcloud currently works with 1,200 business and more than 3,600 charities and with plans to expand this Irish solution is sure to make even bigger strides towards tackling the global food waste problem. 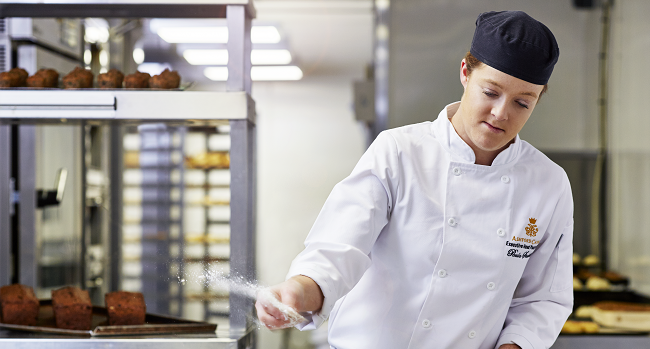 The Princess and the Pastries – … 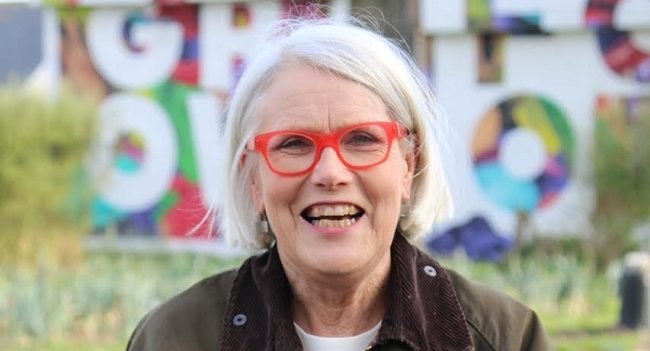 The Grande Dame of Irish Food – … 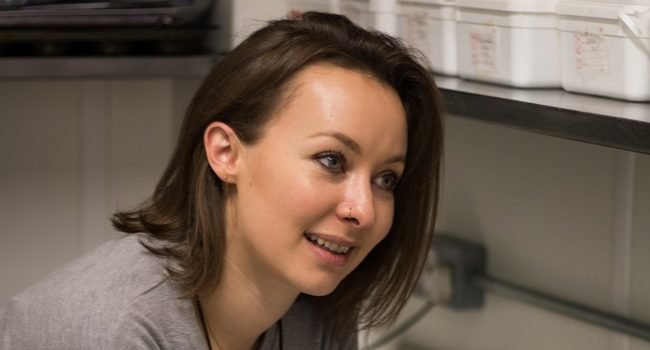 Healthy Food Without the Hassle …